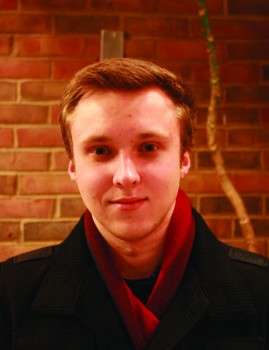 Dimitri Shendell, a first-year student from the Ukraine, poses in Java Junction during his break between classes.

The opportunity to live on two different continents is a dream many of us have. One lucky

person, Dmitriy Shendel, was able to have this chance. He grew up in Ukraine, moved to the United States when he was seven years old, and for the past 11 years has been living in Goshen, Indiana.

Shendel is a first year student and is currently majoring in chemistry and biochemistry. He is enjoying many of his classes this semester, especially cell biology, which he finds both “challenging and interesting.”

Shendel found out about Goshen College while attending Goshen High School. “I had come here with my chemistry class and met the professors and thought they were really nice,” Shendel says. He stressed the subject of having a one-on-one relationship with the professors because this has helped him create stronger and more genuine connections with his professors. Shendel is very grateful to have a supportive academic group. He has been able to form study groups in most of his classes. This has been very helpful to him as it accomplishes two things that he has been finding hard to do with his busy schedule: studying and socializing.

Shendel is also passionate about photography and chooses to indulge in this form of art during his free time. “I mostly enjoy editing!” he said. Editing photographs has become a creative outlet for him, allowing him to show more than what initially catches the eye. There is always more to the picture and editing allows him to uncover parts of the picture that were once hidden.

Shendel was able to go back to Ukraine during his first year of high school and has only been able to return once after he left 11 years ago. He is unsure about any trip back to Ukraine in the near future but hopes to do so after finishing college. He is very excited to be here at Goshen College and is looking forward to achieving bigger things and forming better relationships with his peers.