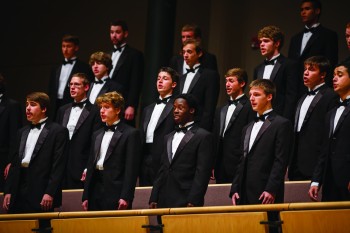 With spring break quickly approaching, the Men’s Chorus is preparing for their six-day tour to New Orleans. On Saturday, February 21st, the men will board their bus and make a few short stops in Indianapolis and Mississippi before reaching Nola, New Orleans, where they will perform in various churches, schools and also in a rest home. The choir will arrive in New Orleans on Monday and head back to Goshen on Thursday. They will arrive on campus on Friday just in time for their concert on Sunday, March 1st at 7:30 p.m.

Scott Hochstetler, associate professor of music and the Men’s Chorus director, is very excited about the location and the theme of the tour this year. The theme is one of GC’s core values—Christ-Centeredness.

“Nearly all of the songs selected for the tour are sacred,” Hochstetler said. The choir is singing three arrangements by Moses Hogan, a widely known New Orleans composer who has done countless arrangements of spirituals. The mother of Etienne Davis, a student at GC, had the opportunity to sing with Hogan while on a tour a number of years ago, deepening the connection between the GC Men’s Chorus and Hogan’s pieces.

The Men’s Chorus tour happens once every three years, so many of the members of the choir have not had the chance to go on a choir tour until this spring break.  The last tour took place in Kansas City and was an enjoyable trip for all who went.

Jimmy Bontrager, a sophomore member of the Men’s Chorus, has never been on a Goshen College choir tour before but is excited to have the opportunity to go this spring break.  Bontrager mentioned that he loves performing with the men’s choir and he said that “the chance to perform and perfect our repertoire multiple times in different big cities on the way down to Louisiana is going to be a very thrilling and rewarding experience.”

The New Orleans culture is a major draw for many of the Men’s Chorus members with its unique music and food. Martin Flowers, a junior Men’s Chorus member, noted that, “New Orleans is one of those places that’s so rich with culture, especially with Jazz music, so I’m looking forward to spending my free time going to as many local performances as I can.”

Hochstetler is also looking forward to experiencing the culture and food of New Orleans, although he is most excited to get away from the cold Indiana weather. While in New Orleans, the choir members will be staying with host families and will have some free time to be tourists, relax, enjoy each other’s company and explore the vibrant city.