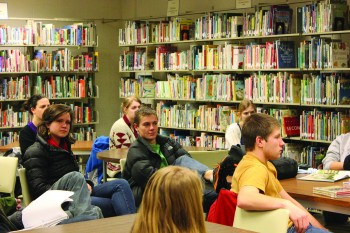 The Student Safety Shuttle will run every Friday and Saturday night through the rest of the semester. It is available to any students who do not think that they can get back home safely from a party.

According to those closest to the project, the goal of the shuttle is to safely get students back to campus and prevent things like sexual assault.

Laura Miller, a sophomore and treasurer of the Student Senate, referenced the death of a Goshen resident who froze to death after passing out from intoxication on his way home in January as motivation for the shuttle.

“We were concerned because a lot of students walk home from parties,” said Miller.

Sarah Hofkamp, a sophomore, agrees that there is danger for those who choose to drink while at Goshen College.

“There is not a safe drinking culture here. We think it’s a good thing that Goshen is a dry campus, but it has created some unintended consequences because there aren’t things in place to make it safe for those who choose to drink. It’s on the students to ensure each other’s safety,” said Hofkamp.

“In regards to student alcohol use, it seems Goshen College has more often taken the route of pretending [drinking] doesn’t happen rather than provide reasonable accommodations to keep students safe. FIRSST saw an opportunity to provide a service to the student body that has the potential to prevent alcohol related incidents,” commented Claire Frederick, a sophomore and coordinator for the safety shuttle.

FIRSST, or Functional Immediate Response Student Safety Team, is the larger initiative under which the safety shuttle falls. FIRSST was created by a group of people who wanted to benefit the community, mainly through bystander education on what people can do to prevent sexual assault.

According to Hofkamp and Miller, most of the sexual assault cases at parties happen when people choose to stay the night instead of going home or when they accept rides home from people they don’t know.

Drivers for the safety shuttle are members of FIRSST and are volunteers. According to Frederick, drivers work in pairs and follow a set of rules to ensure their safety as well as the safety of their passengers.

The vehicles used to shuttle students are the volunteers’ own vehicles. Student senate is currently funding the gas and providing the cell phone where the calls and texts are received. They are working on getting t-shirts or other kinds of insignias to identify themselves to users.

So far, Hofkamp and Miller feel that the shuttle has been a success. The service has had seven calls over the past two weekends.

Students should call or text the service if they are at a party and don’t have a safe way to get home, are alone with a friend who is too drunk for them to assist home, or are in an unsafe situation and need to get out.

“It is also important to note that the service is completely confidential,” said Miller. “There are no punitive measures taken for consuming alcohol. We want students to be respected.”

“And be respectful,” added Hofkamp. “Use [the shuttle], but don’t abuse it.”