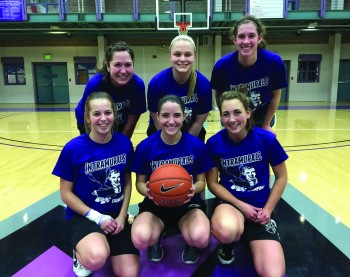 As the intramural basketball regular is drawing close to its end, the playoff scenarios are getting interesting.

On Sunday night in the men’s league, Chuggz ran their record to 3-0 by defeating Dunkin’ Go Nuts 54-38, Maple Jordan got by Team Faculty-Staff 63-55, and Hoosier Daddy grabbed their first win of the season, holding off Blazers 48-43. The league leader entering the night, Pippin’ Ain’t Easy, had the night off.

On Wednesday night, co-league leader Pippin Ain’t Easy saw their unbeaten streak come to an end at the hands of Maple Jordan, 48-39. Chuggz would go on to assume the #1 overall ranking by slipping by Blazers 42-31. Team Faculty-Staff, winless up until tonight, earned a crucial win and kept their playoff hopes alive by knocking off Hoosier Daddy 55-40.

Chuggz-4 wins, Pippin’ Ain’t Easy-3 wins, and Maple Jordan-3 wins, have all assured themselves a spot in the playoffs, but the championship game is still up for grabs. Chuggz control their own destiny and have the inside track to the championship game but still have to play Pippin’ Ain’t Easy, who will be anxious to regain momentum and earn a spot in the finals. With their victory over Pippin’ Ain’t Easy, Maple Jordan placed themselves in the championship race as they only play one more game due to not having a bye yet. The remaining 4 teams all have one win with 2 nights of regular season games left. The next night of games, Wednesday February 4, will be an important night as Hoosier Daddy plays Dunkin’ Go Nuts and Blazers play Team Faculty-Staff. Both games will have major playoff implications.

In the women’s league, the championship came to a close on Sunday night as Short Stack knocked off Wrecking Ballers to sweep the best of 3 series and claimed the coveted purple t-shirts. Wrecking Ballers looked to even the series at a game apiece and force a deciding game 3, but Short Stack never gave them a chance by establishing themselves early in the game. The final score of 52-19 was proof that Short Stack never intended to give their opponent any chance at extending the series. Any momentum Wrecking Ballers seemed to gain was quickly stolen back by Short Stack who repeatedly slammed the door on any potential comeback bids.