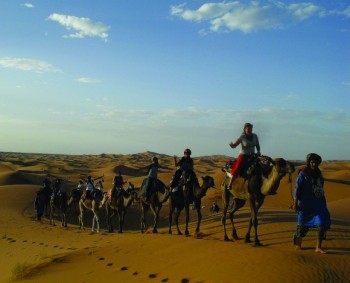 The Study Service Term (SST) program at Goshen College has developed since its beginning in 1968. Since then, there have been 24 different service locations to which Goshen students have travelled, with earlier locations including Cuba, Mali and Poland.

The available SST locations have changed over time for various reasons. “Costa Rica was an SST location for 20 years,” said Tom Myers, director of international education. Likewise, the SST location in the Dominican Republic was an option for students for almost 30 years. Both of these locations were removed as options because “families need a break from hosting students and some time to rest,” Myers said.

Social and political issues such as the Civil War in Egypt were also events which caused SST locations to change. Despite the frequent variation of SST locations, however, the study and service locations the college offers currently have been consistent locations for the last ten years, with the exception of the summer Nicaragua location.

Nicaragua was one of the very first SST locations established in the program’s first year in 1968. But after Nicaragua was struck by an earthquake, Goshen began to consider whether or not to keep the service location active. Ultimately, the program was discontinued because of civil unrest taking place in the country at the time—the department of international education didn’t feel that the location was a safe destination to send students. However, in 2008, Nicaragua was reconsidered as a place to send students for their experience abroad. “We decided to restart the Nicaragua program after we closed the Dominican unit,” Myers said.

Along with Nicaragua, the SST program sent students to countries such as Costa Rica, Honduras, Guadeloupe, Haiti and Jamaica during the study abroad program’s first year.  Today, SST offers locations in Cambodia, Peru, Nicaragua, Senegal, Tanzania and China, and thus far there are no certain plans for an addition of a new SST location.