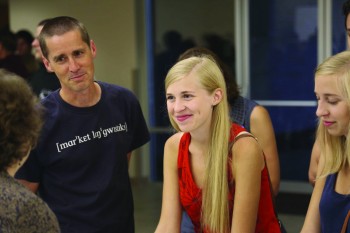 Sarah and Lydia Hartman-Keiser enjoy Scholar Day with their father

Roughly 70 students will be on campus this Saturday for Scholar Day.

Seniors in high school will be on campus to apply for a variety of scholarships. According to Jo Helmuth, admissions office and events manager, these include music auditions, communication and business interviews, the Leaf scholarship and leadership scholarships.

Not everyone who attends Scholar Day will receive a scholarship. Different departments give out a specific number of scholarships to its applicants. Helmuth named the leadership scholarships as an example, stating that only 35 people are actually given awards.

Helmuth believes that this day is and has been a very important day for the college.

“Top scholarships have top scholars apply to them. We really want those students on our campus. This day allows us to bring them to campus so we can sell the college and show how great we are. We want to show them that Goshen College is awesome,” said Helmuth.

Armarlie Grier, a senior, is one of the top students who was brought to Goshen via Scholar Day. Grier received the Stoltzfus award which is one of the leadership scholarships that is designated to go to students of color. In order to qualify for the award, students must have a 3.0 GPA and have shown leadership qualities in high school.

According to Grier, one condition upon acceptance of the award was that she promises to play a role in leadership on campus. Since that day, Grier has participated in the CIIE mentor program doing activities on campus with students. She has done several things in admissions including leading groups of visiting students and more recently recruiting student in Indiana, Michigan, and Ohio.

Close to the end of her time at Goshen, Grier sees the importance and impact Scholar Day has on the campus.