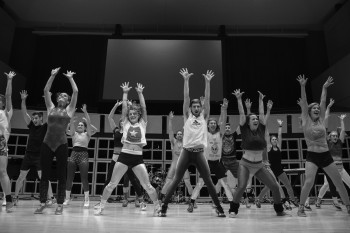 The spring semester of 2015 started off with a bang this past Saturday night in Sauder Concert Hall as Goshen College students competed in Kick Off, a talent show held every semester and planned by Campus Activities Council.

The night began with Not the Real Snarky Puppy, a large instrumental number, followed by a poem performed by freshman Annie Agutu.

“The standing ovation really hit me hard in a good way,” said Agutu. “It made me feel like what I said really touched everyone’s hearts.”

A mash-up of songs by One Direction came next, followed by Fennin’, a dance group comprised of Stefan Baumgartner, a senior, Olivia Ginn, a junior, and Jose Mendoza, a junior, which received third place.

The second-place act came next, which consisted of Prashansa Dickson, Lucas Harnish and Blake Shetler, juniors, along with Maria Jantz, a senior, and Peter Paetkau, a sophomore, performing a Florence and the Machine cover. The first half of the show concluded with a swing dance performance and The 1989 National Aerobics Champions dancing to “Shake It Off” by Taylor Swift.

Kendall and Friends kicked off the second half of the evening with a Sufjan Stevens cover, followed by a breakdance performed by Phil Chan. Solidarity performed a Spanish song and was followed by the winning act of the night, More or Less. The barbershop quartet consisted of senior Jackson Bush, Harnish, sophomore Aaron Graber, and freshman Jacob Zehr.

“Quite honestly I was not expecting to win at all,” said Bush. “So when I heard our name I was just genuinely surprised because I hadn’t really considered that possibility.”

Mother Fishwife did a Beatles cover and were followed by a gymnastics group named Tumblr who performed a routine.

As the judges deliberated, a large group of seniors performed a “Massive Mash-up” to bring Kick-Off Spring 2015 to a close.