Leafs come up short at Taylor 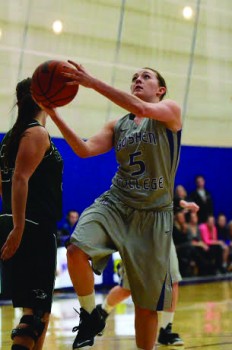 Liz Tecca, junior, goes for a lay up during the game

Taylor has now defeated Goshen in the last eight meetings between the two sides. Taylor freshman player, Cassidy Wyse, set the tone early with her scoring and knocked down two three-pointers in the opening minutes as the Trojans gained the early upper hand with a 10-0 lead. Goshen was able to cut the lead in half at 22-17 by the 9:29 mark after a basket by first-year Keshia Ward, but Taylor responded with a 9-0 run to get ahead 31-17.

The Trojans went on another 7-0 run to extend the lead to 41-20, and Taylor led at the half 47-25 after Cobb beat the buzzer with a basket in the paint to push Taylor to its largest lead of the game to that point. In the second half, Goshen College improved and they won the second half 40-37.

Goshen came into the game with the largest rebounding margin in the Crossroads League, but it was Taylor that dominated the glass in this game, 37-29.

The Trojans shot successfully with 49.1 percent from the field and they had six players in double-figures.  Jackie Osenbaugh was the most remarkable player for Taylor with 18 points, five rebounds and four assists. Wyse recorded 16 points to go along with eight rebounds and two steals.

Sophomore player from Paoli, Ind., Sophie Sears, said, “We didn’t play our best game. We got down in the first half when Taylor went on a run. We played better in the second half but couldn’t close the gap.”

Sears’ goals for the rest of the season are “to have a 2.0 or above assist to turnover ratio and to finish in the top five of our conference.” Sears’ game has improved a lot this season as she has started 17 games of the 18 games played. “Personally, I feel a lot more comfortable on the floor this year,” she said. “I’ve been working on being more aggressive and making smart decisions with the ball,” the sophomore said.

The loss drops the Maple Leafs to 15-5 in the 2014-15 season. Goshen College has one more game before the midpoint of Crossroads League play, and they are now tied with Marian and Taylor in the third position of the Crossroads League. Coach Miller’s team will compete again on Saturday at Spring Arbor, Mich.