These were the questions Ted Swartz asked of audience members this past weekend during the unveiling of his new show, “Learning to Play: A (Timely) Conversation about Sexuality and the Church.” The play, which premiered at Goshen College Sunday evening and as an abridged version at Monday morning’s convocation, grapples with a faith community’s questions about same sex relationships, as a father processes his son’s decision to come out.

Swartz, who is the writer, producer and performer of the play, was a guest on campus this week.  “Learning to Play” is just one of many shows that he and his theatre group, Ted & Company, perform around the country. He also showed a special evening convocation of his play “I’d Like to Buy an Enemy” on Wednesday evening. 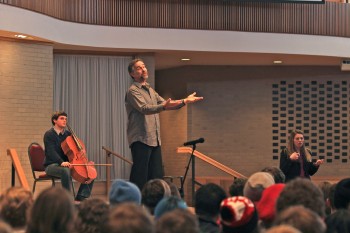 “A play is simply invigorating and instigating discussion,” said Swartz. “You have a point of reference, a commonality. If people feel and they laugh, hopefully it opens them up to other possibilities. Their own vulnerabilities can open up to the vulnerabilities of a character.”

The college invited Swartz to premiere the play after Keith Graber Miller, professor of Bible, religion & philosophy, did a symposium with Swartz in October and heard about his plans. Swartz had done a shorter version of “Learning to Play” in Kansas last fall.

After the premiere, of which Swartz said feedback has been “mostly positive,” he plans to do six more shows this spring. Older attenders in the audience told him they appreciated “the even-handedness it has for people from a different viewpoint,” Swartz said.

“I want [the play] to be seen and if it already has an agenda, it won’t get booked,” said Swartz. “When you talk to someone who doesn’t agree with your viewpoint, if you don’t want to end up shouting at each other, you have to find a way to articulate your beliefs respectfully.” 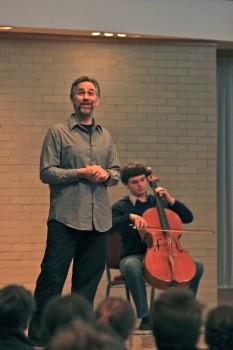 This show was a way to do that. Swartz had several requests to write a play dealing with LGBTQ subject matter for some time, but he declined due to other projects. He also struggled with questions of how it would feel for a “heterosexual, white male to open [his] mouth again.” But last May, another request pushed him in the direction to write.

What came out of the writing was “Learning to Play,” a story of a father who is struggling to come to terms with his gay son, in the broader context of the church’s discussion of acceptance of same-sex relationships. Swartz worked with GC graduates Patrick Ressler and Justin Yoder on the music and sound design; Yoder plays the cello and Ressler, the piano, throughout the production.

“Learning to Play” poses the question: are we doing damage to the church forever? Larger issues in the history of the church have swayed people in many directions: divorce, women in leadership. The question of same-sex relationships is yet another.

But Swartz hopes the show can give people a starting point to stay in conversation with these issues. At the end of the show, one of his characters says of coming out: ‘When I was out, I was really out – out of the group, the family, the church. But inside, I was really in. I was inside my skin for the first time.’

Said Swartz, “I hope the play also gives people a glimpse of what the church can be – not just a place of purity but a place of hopefulness.”