In Support of the Open Letter 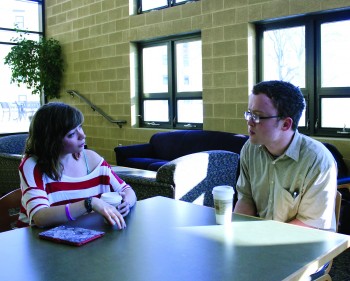 Cara Paden and Timothy Keiderling discuss their views on the hiring policy.
Photo by Hannah Sauder

I spent my first year of college at Eastern Mennonite University (EMU) where I first began to learn and understand the LGBTQ (lesbian, gay, bisexual, transgender, queer and questioning) community.  I joined Safe Space and went to as many discussions and events as I could. I wanted to see what the big deal was, because coming from a fairly conservative background, LGBTQ topics were generally regarded as taboo.  Despite that fact, I began to come to the conclusion that queer people were really just people, and this became evident the more I talked with those in the queer community.

When I transferred to Goshen, I noticed these purple shirts that people wore around campus that had the letters ‘LGBTQ’ on them.  Although I was initially enthused about having the campaign on campus, I had decided to hide my enthusiasm until I fully understood what the shirts meant.

So I would get emails about when to wear the shirts, and I would wear one, but I would wear it under a sweatshirt or something of that sort.  I think I was afraid of being simply categorized as just another activist waving a rainbow flag.   Supporting this cause seemed to mean so much more to me than just activism.  With my limited knowledge of the campaign, it was about supporting human beings and their ability to love other human beings.  It was about supporting love.  Who can say they are against love?

For those people who are still confused about GC Open Letter, the movement is a campaign on campus seeking to change the hiring policy that currently is not inclusive of LGBTQ individuals.  When I understood what the campaign meant, I thought about my friend, Stefan who has been an openly gay man on campus for about one and half years.  Stefan cannot come back to Goshen if he ever wanted to receive a job because he has been open about his sexual orientation to the college and the community.  Anyone who knows Stefan knows that he loves Goshen, and not allowing Stefan to come back to Goshen is discrimination.  This is true for anyone who has been open about their sexual orientation at Goshen.

I normally do not enjoy being in the spotlight.  I like keeping my opinions and feelings private. However, when I think about all the wonderful people that Goshen is missing out on, I want my voice to be heard because this issue matters.  This issue matters because it is about people being singled out for something that they cannot control.  It matters because they are being told that they are not free to love whomever they want.  It matters because we are still using the terms “us” and “them” when it should be a non-issue.

I’m not trying to devalue anyone for what they believe.  If you think it’s a sin, that’s fine, but ultimately, there needs to more awareness of how our words and actions affect other people.  That sometimes, without knowing it, our words can hurt.  How can we talk about diversity and inclusion and not open our doors for absolutely everyone?