Kratz 3 Leads to Corridors of Power in Norway

Jon Kaasa is an international student at Goshen College, in his second year of studies. Kaasa comes from Norway, where the Norwegian newspaper Varden considers his mother “one of the five most powerful women in the country”.

His mother, Gunn Marit Helgesen is the president of KS, the Norwegian Association of Local and Regional Authorities. This is an organization for municipalities, counties and local public enterprises in Norway that tries to contribute to alternative organization models and work methods that promote quality, efficiency and citizen participation. 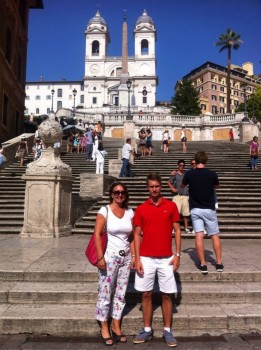 Kaasa said that he is really proud of his mother because the organization that she manages is well regarded in Norway and around the European Union.

But he remembers that his mother didn’t start in the political field when she was young.

“My mother had a lot of difficulties when she was a kid because she grew up in a really poor family. My grandfather was not able to work, and my grandmother had to work to feed five kid,” said Kaasa. “It was hard times for her because the society did not support the success as it happens here in United States, but she finally studied chemistry and worked in the chemical industry Hydro.”

Once she was working in the industry, Helgesen started to become active in politics in her town, Porsgrunn.

“One of the best stories comes from there, because she met my father when she started with the politics, and then I came to this world,” he said. “It is a lovely story.”

Helgesen decided to dedicate her life to politics, and that is how after a lot of meetings, trips and hours, she earned the position she has now.

Kaasa is now used to having a popular mother in his native country. “Suddenly she appears on the TV or in the newspapers doing something important for the interest of the citizens,” he said.

However, the relationship between them never changed, he said. “I do not see her as the president of KS; I see her as my mom,” he said. “We spend the time we have together doing different stuff, and she is a completely ordinary person. Nothing changed.”

Kaasa notes that his friendships did not change either, but he got used to hearing some comments from friends about how they were going to vote for his mother during the elections.

“It is funny because they know more than me about my mother’s politics,” he said.

Helgesen has relevance in the European Union so she has to travel a lot, those were the hardest moments for Kaasa.

“When I was a kid, I really missed her and the best moments were when she was coming back with some kind of present from the place she had been to,” said Kaasa. “I felt like those days without her made me grow up and make a really close relationship with my father.”

Helgesen tried to take Kaasa with her on work trips as often as she could.

Said Kaasa, “My mother has created a lot of international contacts that are really beneficial for us. Thanks to her job, I had a lot of privileges to travel; I could see the best parts of every country we have been to because my mom’s contacts tried to show the best of their regions,” he said.

“I was able to participate in a circuit that most people are not able to do- I could eat really good traditional food, we visited characteristics places, they provide us the best guides promoting, and I could meet important politicians in the European Union,” said Kaasa.

Kaasa said, “It is amazing the fact that I know Erna as a part of the family. I met her some years ago and I had many meals with her. She is a really smart person that will make great things in my country. My mother and Erna have been working close to each other for a long time, so now I feel that my mother has Norway’s future in her hands.”

But why did Kaasa choose Goshen College when his family holds such influential ties in Norway and he might have had a privileged position there?

He explains it in this way: “I felt like I wanted to keep playing tennis during my college life and United States was the only option to make that. I sent my video and a letter to a lot of tennis coaches, and one of the best scholarships came from Goshen College,” said Kaasa.

“I did some research, and I really liked its physics’ program, so I decided to come here last year. I am glad I made that decision,” said Kaasa.

Kaasa also says that his mother supported him coming to Goshen. “She was sure it was the best option to my future,” Kaasa said.