Sophomore Trio is Force on the Court

The Goshen College Women’s Basketball team has come together to be a force on the court this season. Leading that force is “the sophomore trio,” composed of point guard Liz Tecca, guard Jo’Mani Thomas and power forward Tyra Carver. 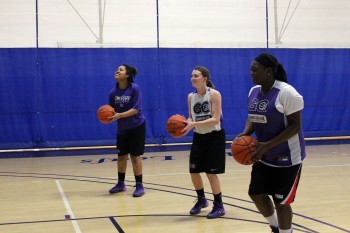 The sophomores have worked together this season to play an essential role on the women’s team. Recently recognized as Goshen College´s first “athletes of the week” to start off the 2014 year, “the trio” continues to make a statement on the court.

Jo’Mani Thomas, of Fort Wayne, is scoring an average of 11.7 points and gets 7.7 rebounds per game. Improving her numbers by more than one point and one rebound per game played.

Thomas said, “I am happy with this season, with the team’s victories and with my teammates. Our team’s goal is to win and come together; I know that we can do so much. We just need to keep working as hard as we are doing.”

Tecca and Carver played on the same basketball team in their hometown of Kalamazoo, Mich. during their junior and senior years of high school. They are both excited to be back on the same team, helping Goshen College to victory. Their hard work during practice and in their free time off the court reflects their numbers. With Tecca scoring an average of 11.7 points per game while Carver leads the team in scoring with her 14.2 points average during this season.

“I spent a lot of time playing with Tyra, and I love to play with her. We know each other well, we don’t need words to communicate on the basketball court,” said Tecca.

Their contribution was evident in their recent conference victory against number 22 nationally ranked, Huntington University. Carver assisted Tecca, scoring the last two points of the game, and achieving a 64-63 victory.

“We usually know what the other is going to do every play, we made eye contact and I knew she was going to pass me the ball. It was a really exciting game,” said Tecca.

These three players agree that the strong point of the team is their relationship with one another.

They are “a big family that has a lot of fun together. We are really close to each other. We spend a lot of time together on the court but also outside. Jo’Mani and Tyra are very goofy,” as Tecca put it.

Other players enjoy their energy and hard work on the court as well.  Freshman teammate Sophie Seers said, “I love to play with them. They are always giving more than 100% in every game and practice. I just want to learn from them and keep improving my game with those three girls during the next three years.”

As the team moves through the second half of their season, the trio’s force continues to lead them.