At the semester’s end, Goshen College announced faculty reductions and other changes for the 2014-15 academic year.

Academically, the college plans to increase student-faculty ratios, implement the use of connected academics “schools” to create more interdisciplinary majors, and offer fewer low-enrollment courses. Further changes will come late in the spring as the administrative side of campus is reviewed and restructured. 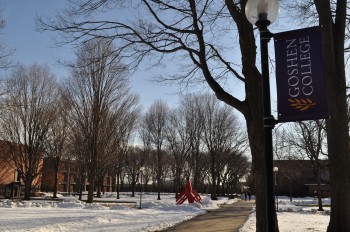 The campus, blanketed in snow, meets the changes of a new year.
Photo by Lauren Weaver

The changes come during a long-term strategic planning process and preparation for institutional re-accreditation in March 2015. At the same time, the college is in the process of addressing a several million dollar budget deficit for 2014-15.

During the course of the last year, and especially this fall, Goshen College began reviewing institutional standards to see what changes might be necessary, via the college’s Dean’s Advisory Committee.

“The President’s Council knew we were coming to the end of our last strategic planning and were preparing for accreditation, but we also began thinking last spring of where we wanted to go in the future,” said Scott Barge, director of institutional research, assessment and effectiveness, who is coordinating the restructuring process. “This fall, once enrollment numbers were finalized, budget came into play in the process as well.”

The financial situation isn’t as simple as it appears, according to Jodi Beyeler, interim director of communications and marketing.

“We have a large endowment fund, $100-plus million,” Beyeler said. “Institutionally, our financial foundation is very strong.”

But the administration believes the college can’t be irresponsible in day-to-day living.

“The long-term priorities supercede any short-term solutions, such as dipping into the endowment,” Barge said, comparing the endowment to a retirement fund; you wouldn’t want to drain that money dry in order to continue to go on a nice vacation year after year.

Another issue is the number of incoming students; numbers for incoming classes have been roughly the same for the last three years and the college is not meeting its goals for enrollment growth. In short, there aren’t enough students to support current structures.

“Everything has shifted so much,” Barge said of the academic world. “It’s not the same as it was 10-15 years ago to run a four-year residential college. We could solve the problem with a 15 percent increase in tuition, but that would be irresponsible to our students.”

Instead, the committee considered how much the college offers in terms of majors and minors, as well as the faculty-student ratio. With the changes necessary, Barge said it wouldn’t be productive to change or cut majors and minors. But “there are more courses than we would like with less than 10-15 people in them,” Barge said.

The college will now work with departments to offer a leaner set of courses. As such, the college will lay off  several full-time and part-time faculty members for the 2014-15 school year, said Beyeler. Additionally, some full-time professors were cut back to three-quarter time. The names of the professors affected have not been released.

“We are working quite hard to keep as many people as possible,” Barge said.  “No tenured professors will be let go and seniority certainly was considered. Some professors who were teaching eight courses per year will teach six next year. Any professor teaching less than six courses will be considered an adjunct. ”

The college is also moving from a departmental organization to a “schools” organization. These “schools,” which already exist, each combine common majors under a larger roof: Humanities (including arts, music, English and American Sign Language); Society and Religion (including history and social work); Nursing and Science (including psychology); and Professional Studies (including communication, business, education and physical education).

Departments will remain, but within a larger framework so that students can more easily combine overlapping subjects to create new interdisciplinary majors. There will also be program directors rather than department chairs, who will oversee the development of new courses.

“The new program will make it easier to combine majors and minors from different schools via program directors,” Barge said. “Current structures make it tricky to understand how those major crosses work. By moving to schools, that process will become easier.”

Said Beyeler, ”We want to maintain the integrity of what we’re offering. GC is a place with strong programs due to strong people, and GC wants to keep college affordable.”

Though the changes are many, the college’s top priority, according to Beyeler, is to make sure people graduate.

“The thing that is life-giving amongst all of this,” Barge said, “is that we have the opportunity to work together in innovative and exciting ways.”