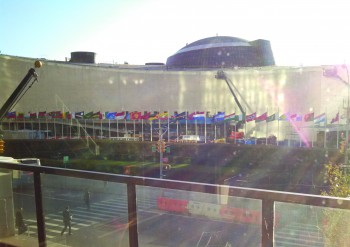 The bearded man spoke with utter compassion, his voice trembling as he recounted the devastation he experienced in war-torn Vietnam. This man was Doug Hostetter, and he works for Mennonite Central Committee (MCC) in New York City, right across from the United Nations.

A group of seniors and I drove to New York last weekend following fall break to attend MCC’s conference on United Nations peacekeeping. There, we met 40 other students from Mennonite-affiliated colleges throughout the US and Canada.

Hostetter was one of the primary speakers at the conference. During the Vietnam War, he registered as a conscientious objector, but ended up going to Vietnam for another reason: alternative service. He told many stories that weren’t easy to listen to, including ones about Vietnamese farmers who even today pick up and relocate active bombs with their bare hands.

At that point, I realized that a comprehensive understanding of war does not only happen by pouring over theories or potential solutions written in books. It also comes from being in a war-torn country, where UN peacekeeping soldiers are funded to kill, where families are separated, and where car bombs explode.

One UN peacekeeping representative spoke to us about what UN peacekeeping consisted of in a past mission to Burundi. He spoke dryly of the resolution to “use all necessary means,” including killing people, to ensure security.

MCC volunteers build relationships with people in war-torn countries and relay the situation’s conditions back to the MCC UN office. That way, the office can advocate on behalf of those who would be further victims of war.

It doesn’t take much to realize the relentless relationship-building work that MCC does. The bags under Doug Hostetter’s fiery eyes and the overflowing passion in his voice told the story just fine. Hostetter had been a witness to outrageous violations of human security. It’s these passionate people who have personal relationships and experience that start to change the war cycle.