Goshen’s men’s tennis team ended the season with a 6-6 record (4-4 in Crossroads League play) that awarded them the fifth seed in the League playoffs. They fell 6-3 to Marian University in the opening round. The .500 record was the best record they have finished within the last five years. The young squad was competitive all season thanks in part to consistently strong play at the number one singles position. Balazs Pirot, a sophomore, finished the season with an 18-3 singles record, all at the number one position. The superb season made Pirot a unanimous selection for the all-league team. This is the last year of tennis for their lone senior, Krishnan Ganesan, who played in the sixth singles spot this fall. 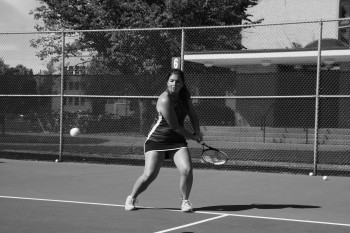 The women’s tennis team concluded its season on October 4th with a hard-fought loss to visiting Adrian College. They lost 4-5 in a battle that featured several close matchups dropped by the Leafs. The loss was a missed opportunity by the Lady Leafs, who dropped to a 1-12 overall record, 0-8 against League competition. The team, however, saw improvement over their 0-12 finish in 2012, concluding with their fourth best record in the last five years.

Goshen’s men’s soccer team finished the year with a 6-11-2 overall record, 3-4-2 in the Crossroads League. Hindered by injuries and inexperience early in the year, the Leafs limped to a 0-5 start before a pair of 2-1 victories over Saint Xavier University and Calumet College of St. Joseph. They then mounted a run up the Crossroads League standings with a 4-3-2 record in the middle stretch of the season before dropping their final three games, including a 3-1 postseason match at Bethel College. This season marked a return to the postseason for a squad that missed out after last year’s 6-9-2 record. This season was the fourth-best overall record over the last 5 years but the third-best League record in the same time frame. Defender Caleb Frey, a senior, was named to the all-league first team and Midfielder Khavoir Graham, also a senior, was selected as second team. The Leafs will lose eight seniors from this year’s squad.

Goshen’s men’s golf team completed their first season under head coach Greg Hire this fall. The team was unable to post team scores during the fall season, as a team is made up of four golfers and the Goshen team consists of only three men. However, they saw some individual success as Ben Pollitt, a junior, signed for a career-low score of 72 in the Battle at Blackthorne tournament, hosted by Bethel College. The team dealt with some injuries and messy weather in an up-and-down non-conference season. Following a winter of training, the Maple Leafs trio of Pollitt, Alejandro Genis, and Brian Charles will compete in a full slate of tournaments in the spring of 2014, including a Crossroads League tournament where they hope to be very competitive.

In a game that seems far too recent to have been only two months ago, the Dale Stoltzfus era got off to an auspicious beginning on Aug. 28, as Goshen came back from an early deficit to defeat Purdue-Calumet 3-2. The Leafs followed that by winning four of their next five matches, including a defeat of local rival Manchester. But as it so often is, the Crossroads League schedule was a meat grinder – after that 5-1 start, the Leafs finished 3-9 in their last dozen matches (2-7 in conference play) and took the ninth spot in the league standings. Emily Fretz, a senior, and Kate Vendrely, a sophomore, led the team with five goals; Alia Munley, a junior, tallied four assists, most in that category. Goshen’s eight wins were the most since a 9-10-1 mark in 1998.

The Leafs entered tonight’s conference finale with an overall 9-22 mark and a 3-14 Crossroads League record. Regardless of the result of tonight’s Goshen/Grace match, which ended after press time, the Leafs will finish eighth in the Crossroads League, setting up a quarterfinal match with number-one seed Bethel next Tuesday night. The Leafs’ lack of luck in lengthy matches in September played a part in the subpar record: in the span of 14 days, Goshen played three five-set matches and lost each one. Stacy Wyse, a senior, holds a slight advantage over Kelsey Smith, a sophomore, for the team lead in sets per set, 4.41 to 4.38. Wyse became only the second player in school history with 3,000 assists and 1,000 digs for her career: she will likely finish second on the all-time assist list (3,741 entering tonight) and sixth in digs (1,110).

While the Maple Leaf men have received votes in the NAIA national poll, in many ways the team has been overshadowed by an individual. In his second traditional collegiate meet, Ryan Smith, a first-year, broke a program record that had stood since 1980. Smith has finished the standard 4.97-mile course in under 26 minutes four times; prior to this fall, a sub-26:00 finish had happened 25 times in Maple Leaf history. Goshen will travel to Winona Lake, Ind., for the conference meet on Saturday. Featuring eighteen starters in their most recent meet, eight runners within two-and-a-quarter minutes of Goshen’s number-one runner, and three first-years in the aforementioned top eight, the Leafs are hopeful of qualifying for the national tournament this year and in years to come.

Paced by a trio of transfers in the top seven, the Leafs have finished in the middle third of four-fifths of their meets, finishing first in the other one. Six different runners have finished in the top three places for Goshen, while nine have finished in one of the seven slots that affect scoring at some point this season. The Leafs have been hampered by several injuries, in addition to differing course lengths: Goshen’s raced at the NAIA’s 3.11-mile distance as well as the NCAA’s 3.73 miles and the hokum karem’s three one-mile loops. The former distance will be covered in both of Goshen’s remaining meets: Saturday in the Crossroads League championship and Nov. 23 in the national meet.