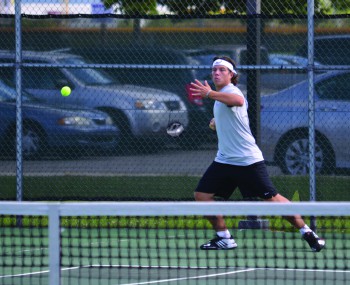 Balazs Pirot in action on the tennis court. Photo by Josh Gleason

Balazs Pirot, a sophomore tennis player, was named to the men’s tennis All-Crossroads League team this past week. Pirot was one of only five unanimous selections for the 2013 team, as voted by the league’s coaches. The 12 man all-league team is selected every fall, following the conference season.

“I kind of expected it, actually,” said Pirot. “My season was going really well. But I still felt happy [after hearing it]. I got to find out that all nine out of nine coaches voted for me. ”

Pirot finished the season 18-3 in singles play, 8-5 in doubles. He finished a dominant season of conference play with only one loss as the number one singles player. He was happy about the season as a whole, adding, “I want to improve. Obviously I want to improve on my doubles record. That’s what we are going to work on next season.”

After next spring’s non-conference season, the Maple Leafs will lose only one senior, Krishnan Ganesan, who played in the sixth spot this year. Pirot hopes that the young talent on the team, coupled with incoming freshmen, will come back next year to more success on the courts. With the added experience of spring play, the young squad hopes to improve both singles and doubles results next conference season.

“This year’s winner, Marian, is losing players, and we are only losing our number six player,” concluded Pirot. “If we can get a good recruit, [then] we have very good chances next year, which the whole team is looking forward to.”