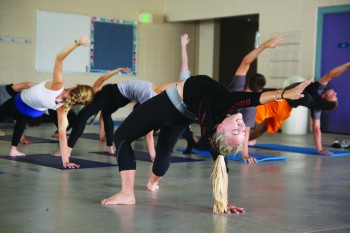 Hayley Mann leads stretches at one of her weekly classes. Photo by Isaac Fast

Although it is Hayley Mann’s first time instructing a yoga class solo at Goshen College’s Recreation and Fitness Center, one would barely be able to notice. Whether it is her gracefulness and fluidity as she transitions from pose to pose in the sun salutation sequence, or the confidence that exudes with each stretch, she seems as if she has been doing it for years. To some extent she has, assisting classes since the age of sixteen in her hometown of Phoenix, Ariz.

Her love for yoga began in tenth grade, when she began attending yoga classes in Phoenix with her mother.

“I love the physical practice of it,” Mann said. “The sweating, stretching, strength, struggle and determination it all requires.”

Before long she wanted more – not only to learn poses, but also to learn the philosophy behind yoga and how she could apply that mentality in her everyday life. After attending yoga classes for a year, Mann knew she wanted to become an instructor.

Several months later, after she completed the 200 required class hours, taught her own 75-minute class critiqued by her yoga teacher, and observed fifteen hours of other classes, Mann had become a certified yoga instructor. Being only sixteen years old and receiving certification proved a major accomplishment, but Mann could only assist classes, since the age requirement to instruct is eighteen. She assisted classes up until she left to study bio-chemistry and journalism at Goshen College this year.

After arriving at Goshen College, Mann realized that the Recreation and Fitness Center didn’t offer any yoga classes. Knowing that the community, especially the student body, could benefit from yoga, and after hearing from many people that really wanted to take classes, she set out to start her own. Mann got in contact with Josh Keister, RFC director, and before long had classes scheduled.

One of the things that drew Mann to yoga was the ability for it to strengthen her spiritual perspective. She explained to me that she found a way to live out her Mennonite-Christian faith through yoga.

“It gave me an outlet to practice what I should and want to be doing in order to be a more loving, caring and kind person,” Mann said. “My practice lets me connect to others, to the earth and to myself.”

While having much experience taking and assisting classes, Mann does have some worries as she begins teaching. Yoga is very personal, and people have their own preferences, Mann knows, so she worries that students might not like what she has to offer.

But she hopes to look at it positively — as a learning experience where she can accommodate her attendees and their wants with her teaching styles. To tackle this fear, Mann is offering two types of yoga classes for the public.

She knows that she’ll relax, she said with a laugh, “once I have a good playlist and regulars who will help set tone for actual classes.” She’s been working on her playlist, she told me, adding softer songs like “Water Song” by ALO, in the beginning of her classes, which then build up to flow songs like “Classic” by MKTO and “My Body” by Young Giant. Mann says that for the end of the class, “I go old school, with songs like ‘Durga Pahina’ and ‘Mother Wingspan.’”

Morgan Short, a first-year, said she really enjoyed the relaxing atmosphere and mood.

“I liked that she gave us a theme to think about while we were doing yoga because it helped me focus my mind,” Short said.

She did run into some physical and mental challenges during the class. Certain poses, such as the headstand and splits, pushed her body to its limits, and she found herself letting her mind think about all the work she had to do for school, but the class allowed herself to let go of stress.

Short plans on returning to yoga classes and encouraged other students to attend as well, “as long as they are willing to try to be flexible.”