So many clubs, so little time 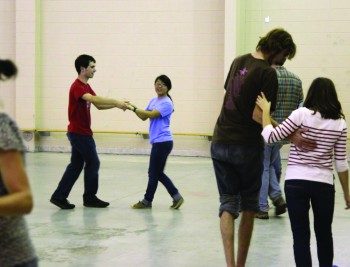 Nearly three weeks have passed since student clubs lined the Union hallway advertising another year of hobbies and activism. This year, Goshen College has a grand total of 36 clubs, and Chad Coleman, director of student life and intramurals, said there has been a definite rise in the number of student organizations.

“I think the Student Senate has a lot to do with [the increase in clubs],” said Coleman. “They have been putting out there that they have funding and resources for clubs. They have been more proactive . . . in getting students interested.”

Not only are there more clubs; there is also good turnout at club events. Ammon Allen-Doucot is one of Pax Club leaders and hopes for Pax to have a greater impact on the campus this year.

“Pax club did a big push during [the School of the Americas protest], but did almost nothing the rest of the year,” Allen-Doucot explained.

Another club which has been experiencing good attendance is the International Student Club. ISC leader Solongo Gonchigsuren said that the club’s next event will be a trip to Chicago over fall break. The club’s monthly meetings will cover topics such as presentations on different countries and cultures, social interaction and planning for careers.

One of ISC’s biggest events is its Thanksgiving dinner. “International students don’t go home, but everyone else has left,” said Gonchigsuren. “So we gather everyone together to have dinner.”

So what is the key to a club’s success? Coleman said faculty support is one factor. “It’s been pleasantly surprising to see them find faculty advisors,” said Coleman. “That is not always the easiest thing to do, so I’m thrilled to see that the faculty has stepped up to help make these clubs a reality.”

A second factor is trendiness. Coleman gives the example of the Ultimate Frisbee club, which fizzled a few years ago after students lost interest. “Things run in cycles,” Coleman explained.

Another club killer can be not setting up the next generation to inherit leadership, “particularly when students who have run it for so long graduate and they don’t have anyone to pass the torch to,” said Coleman.

What seems to be a common theme among the longer-lived student groups is inclusivity. Said Allen-Doucot, “We are devoted to growing identities across campus as a whole.”

“For our welcome party at the campus cabin we had about 40 percent American students there,” said Gonchigsuren. “When we plan an event we don’t see it only from an international perspective . . . we think if an American student comes how would they feel? We try to maintain that interaction.”

To learn more about the various other clubs on campus visit http://www.goshen.edu/campuslife/clubs/ or check the Communicator for upcoming events.