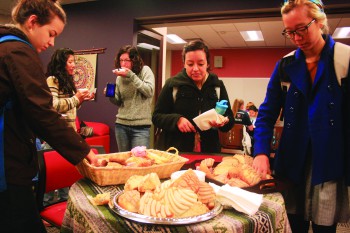 In Oct. 2006, Jim Brenneman, Goshen College president, unveiled a plan to establish the Center for Intercultural Teaching and Learning, funded under a $12.5 million dollar grant from Lilly Endowment Inc.  The funding, which was allocated annually, will end after this year, but GC leaders have plans to sustain its programs.

“This is the last year of the grant, but we have been working over the last six years to systemically infuse the work of the original CITL grant into various areas across the college: admissions, financial aid, academic curriculum, student life, etcetera,” said Anita Stalter, vice president for academic affairs and academic dean.

CITL, now known as Center for Intercultural and International Education (CIIE), began with three goals, according to a GC press release posted in Oct. 2006: “researching the resources and challenges that changing demographics bring to a rural Midwest community and to higher education, creating an intercultural learning environment to benefit all students and strengthening current efforts in recruiting and retaining regional Latino and other minority students.”

According to Stalter, the admissions office will continue to recruit local Hispanic students, continuing to support them and their families with information about scholarships and financial aid.

Her reference is to part of Goshen College’s 2010 to 2015 strategic plan, which includes becoming an HSI under the “creating an intercultural community” strategic initiative.

The first two original goals of CIIE have also been addressed.

“We continue to have multiple opportunities to share our learning from the grant with other colleges and universities at conferences, through web resources and professional contacts,” said Stalter.

Since its conception, CIIE has published two projects, which are related to minority achievement in higher education, in peer-reviewed journals.  According to Rebecca Hernandez, associate dean of intercultural development and educational partnerships, CIIE will soon publish a book.

“We are currently writing a book about our experience over the last five plus years of the Center. That will be done and hopefully published by spring 2014,” Hernandez said.

Hernandez also cited other CIIE programs that will continue after this year.

“We continue with diverse student programming, outreach with the greater Indiana region through a Spanish radio Show,” she said. “We have also started the Masters of Arts in Intercultural Leadership (MAIL) this summer and have one cohort of 10 students enrolled, with another cohort starting in January 2014.”

Stalter added that CIIE affected the changes to the GC core curriculum.

“Our curriculum underwent major changes as we designed a core experience for all students that gives many opportunities to develop intercultural competence and experience relationships with students from diverse backgrounds,” she said.  “We will continue this curriculum work.”

“CIIE is not a short term endeavor, but rather the next chapter in the ongoing commitment to our core values expressed through action,” said Hernandez.  “We are very excited about the work we have completed in the last six years and where we are going.”