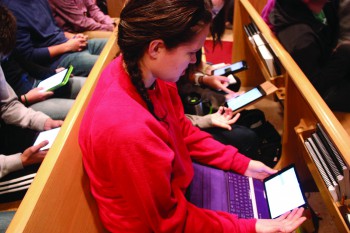 Sarah Hofkamp and other first-years take advantage of the new iPads in a convocation. Photo by Grace Boehm

For the second year in a row, Goshen College has distributed iPads to all incoming first-years. But for the first time, iPads have been made available for purchase by juniors and seniors at a reduced price.

A total of two hundred and twenty-seven first-year transfers, juniors, and seniors took advantage of the opportunity to lease an iPad, according to Patricia Goodman, IT assistant director.

“The iPad Mini is a lighter, more transportable device with the same screen real estate and operating system as the iPad 2,” said Peterson-Veatch. “This helps with keeping the device in its proper context as a secondary device, not a primary one.”

Peterson-Veatch also said that the iPad Mini is a lot more cost efficient than the iPad 2, making it easier to sustain the program for incoming students and to make iPads available to upper-classmen and first-year transfers not taking the Core classes.

Peterson-Veatch said that the opportunity was made available as part of the plan for phase 1 of the iCore Technology Initiative. Phase I of the plan is known as the digital foundation, which is a main part of the new GC Core curriculum and includes classes such as Core 100.

“Phase 2 is supporting faculty in using more online course materials and producing and publishing materials of their own,” said Peterson-Veatch.

On top of the technology changes, new changes were also made to the Core Curriculum, specifically towards the Identity, Culture, and Community class, also known as ICC.

A variety of sources were used when determining the new changes that would be applied this year. Course administrators gathered professors of the ICC class in February to discuss the new changes, which include the reduction of one credit hour. Last year the class counted for four credits and met four times a week; this year the class has been changed to a three credit hour class.  Instead of large group sessions every week, the class meets nine times during the semester.

First-years and upperclassman alike are happy to have the opportunity to lease the iPad. “I love my new iPad,” said Marissa Weldy, a senior. “It’s so convenient. Now I have

games and I don’t have to carry around my laptop everywhere.”