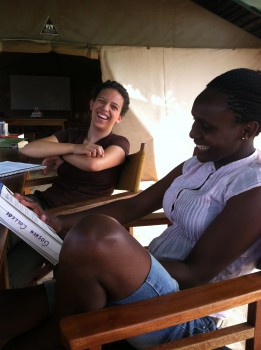 Ellie Schertz, a junior, laughs with a friend. Photo by Mandy Schlabach

Two years ago, Ryan Sensenig, biology and environmental science professor and department chair, took a group of four students on a research trip to the Kenyan savannah that, he said, was strictly scientific. Although their research on the effects of fire on the environment led to significant developments, Sensenig realized after the trip that there was more to take note of than data. A dynamic component of the experience was missing: the human aspect, he said.

So, for the group of six students who travelled to Kenya for a class with Sensenig last summer, the intention was not only to collect data, but also to observe their surroundings, make connections with local researchers and students, and study the regional land management styles.

The students were Leah Amstutz, Ali Fretz, Will Kanagy, Ellie Schertz, Mandy Schlabach and Josh Yoder. When they arrived at their destination, Mpala Research Center, four Kenyan students studying from nearby universities joined the class. Together, they studied the complexities of the regional ecosystem, forming friendships along the way.

Mpala Research Center is located under the shadow of Mount Kenya, a landscape teaming with wildlife.  Among their assignments, the students were given the task of documenting local species. Common names on those lists included giraffe, hippopotamus, elephant, dik dik, zebra, dryx, lion and warthog.

“There was this wonderful white noise,” said Yoder, a senior, describing the sounds of hyenas at night and birds in the morning surrounding their riverside campsite.

Though they spent their mornings and nights at camp, their days were spent out in the research field. For three weeks, the Goshen College students and Kenyan students awoke, ate, studied and socialized together.

“I remembered feeling, right at the beginning, that the group was cohesive,” said Shertz, a junior.

Amstutz, a sophomore, found her learning experience was improved with relating to the students who grew up in the area.

“If it were just us,” said Amstutz, “it would have just been the plants and animals side without the human interaction side of things.”

A typical day for the group began with breakfast, accompanied with a motivational thought and an “animal of the day.” Then, the group would leave camp to research plots of land that had been burned, noting the effects of fire on the environment.

Sensenig’s expertise, and the subject of his graduate work, has been researching to what degree fire is a process in ecosystems.

The research process begins with a controlled burn on a specific plot of land. Then, the grazers (cattle, elephants, goats, etc.) that enter that plot are controlled by the researchers in order to study the degree to which the fire has affected that particular animal species and the ecological landscape.

Ranchers in Kenya have been observing the patterns of grazing animals for years. Through the observation process, they have developed different ways of managing their land. The class spent a portion of time studying different land management techniques ranging from the pastoral method that incorporates cattle rotation to the less traditional method of keeping more animals on a smaller area of land for more time.

“We were having fun asking how traditional practices translate up to the modern context,” said Sensenig. “It was an intentional approach to realize the social, historical, ethical issues related to land management.”

Kanagy, a senior, noticed the way Kenyan ranchers adapted to the environment around them instead of trying to manipulate it.

“Their idea is that humans fit into ecology and aren’t totally separate from the rest of it,” he said. “Instead of getting rid of nature, the idea is to protect and use all of it.”

Yoder also noticed his shift in perspective upon returning home.

“It was a humbling experience to be in the presence of things that are bigger or stronger than you and be put in your place as a human and remember that these creatures have a right to live,” he said.

Sensenig will take classes to Kenya for May Term this year and in the summer of 2014. His long-term goal is to find a way for different societal groups to interact with one another and to tackle tough ethical and ecological issues.

“When I look back on this experience, I learned a couple things,” he said. “The one that really stuck out to me was that ongoing dialogue between undergraduates from different places is a way we can contribute to peacemaking and justice.”