Katie Dwyer-Zeman and Neal A. Friesen are among the many new faces that appeared this fall in the Kratz, Miller and Yoder buildings. Both are new assistant directors of residence life and student activities.

Friesen, a 2007 GC graduate, recently completed his master’s degree in theological studies from Wesley Theological Seminary before joining the staff.

As a new residence assistant director to Yoder building, he brought three years of experience as a resident hall director at Hesston College in Kansas.

The first few weeks have meant many introductions for Friesen. However, as a graduate himself, he is able to reminisce with faculty and alumni. Though the campus has changed since he graduated, he notes that many things have remained the same.

Friesen was drawn back to Goshen because of its broader picture of social justice that, he feels, is inclusive and keeps in mind gender issues and other differences on this campus.

Dwyer-Zeman came to Goshen College asking herself two questions: one, how she was going to be an advocate for women and, two, how she could support the GLBTQ community. Those questions were originally posed to her in a student lunch before being hired. Thinking about those two questions impacted her most while preparing for the job.

“Prior to this,” Dwyer-Zeman said, “I had a hard time finding people asking those questions. But to arrive in a college campus and to be asked those questions by students younger than me was extremely impressive, because I believe those questions are important.”

Dwyer-Zeman, a Huntington University graduate, brought her work experience as resident director and coordinator for campus activity. Her former job experience included brainstorming, planning and executing student events at Huntington. She said she is already excited by the nature of inclusiveness, diversity and equality that she has witnessed in many aspects of daily life at Goshen.

Dwyer-Zeman said she is open to engaging not only in a “mentor/mentee” relationship, but “also to being on the same page with the students, in order to learn from each other.” 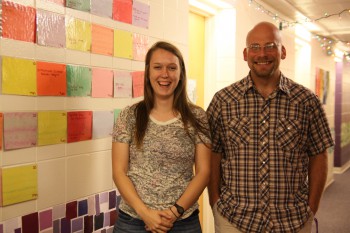 New resident directors Katie Dwyer-Zeman and Neal A. Friesen on one of the Yoder floors they help to oversee. By: Isaac Fast