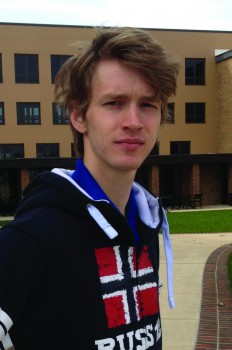 Jon Kaasa is a first-year physics and math major from Norway who plays tennis at Goshen College.

Tell us a little bit about your background.

I was born in Porsgrunn, a small city about the same size as Goshen, at the southern tip of Norway. When I mention Norway, people always ask me if it is cold there. Therefore I will use this opportunity to clarify some basic climate facts. There is a big variety of climates throughout Norway. In the very north it can be very cold and during winter time almost no sunlight, maybe three or four hours a day. In the south where I live, in the winter time it is only slightly colder, but there is more snow than here in Goshen.

What inspired you to come to study at GC?

It is through tennis that I got the idea of studying abroad. In Norway all sports are on a club level, and it would be hard to continue to practice in a new city and it would be all on my own commitment. It is also a growing trend in the tennis environment to study in the U.S. and play college sports. Ever since I brought up the idea, my mum was a big supporter. She wanted to give me the opportunity which she never had when she was young.

We got in contact with some agents which would help me to promote my scholarship to make the “dream” of studying in the U.S. more possible. I got multiple offers, but Stan B. King, head coach at Goshen, was the one showing the most interest. He wanted to make it more personal and insisted upon calling. I thought if everyone in Goshen is as kind as him, it must be a fantastic place to go. In addition they provided the classes and majors I wanted to take.

What do you miss the most coming from Norway?

There are of course some things I really miss, like my family and friends. I love to make new friends and meet new people from cultures across the world which make me challenge myself, my own identity and my own beliefs, but it is strange to start all over. I try to keep in touch [with my old friends], but it is not in the same way as before.

Also it is strange to be so independent and far away from my family. I really miss my mum’s food!

Tell us about Norwegian pop culture.

Norway is very influenced by Western pop culture, so overall I feel it is very similar to what is popular here in the U.S.

When it comes to religion, Norway and the our constitution and mind set are based upon Christian values, because the majority of the people are Lutherans. For that reason we celebrate most Christian holidays in the same manner as the U.S.

Also our independence day, May 17, is a very important holiday we celebrate. It is full of parades and especially children’s parades to symbolize that we are a free country. Most people dress up in their nicest clothes and it is common to put on the traditional Norwegian clothing, Bunad.

How influential is the monarch in your country?

The king of Norway has very little power. This position is more symbolic than anything else. The king’s work is to travel around the world and promote Norway and Norway’s interests. In theory the king does have some kind of political power, because he is allowed to veto if he disagrees [with a law]. In theory this gives the king some kind of power, but he only uses it very rarely. I don’t think that it has been used by any king for the last 100 years. Generally, Norway is very Social democratic in our politics. Freedom, liberty and equality are very important values, with equality valued the most.

What do you see of your self in five years from now?

To be honest, I do not know. I try to not focus too much on what I will do that far in the future and rather try to focus on what I have to for the next weeks and enjoy every day. I think I will go to grad school, so I might be there studying in five years, but who knows. So far that is my only goal and the rest I will take as it comes.