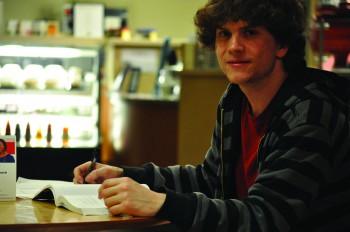 Every year, Goshen College math aficionados have the opportunity to compete with roughly 4,000 other students from colleges all over the U.S. and Canada. The William Lowell Putnam Competition—named after the 20th Century banker and Harvard graduate—consists of solving 12 difficult problems in six hours.

This year, Andy Clemens, a junior math and physics double major from Goshen College, was recognized as one of the best performing competitors.

Despite ranking higher than 85 percent of his 4,000 peers, Clemens was modest about his performance. “I did well because I enjoy math so much,” Clemens said. “If you want to do well in a competition like this, the most important thing is to enjoy it, and not everyone does. The more you enjoy something, the easier it is to practice.”

Clemens said he could get stressed easily but that the competition took place in a relaxed environment. “It was in the science building—just me, David Housman and two other students.” Housman is a professor of mathematics at Goshen College.

Clemens might be one of the top math students in the U.S. and Canada today, but things didn’t always come so easily for him. “In middle school, I didn’t do so well,” he said. “It was a lot of work and a lot of memorizing, which I think turns a lot of people off.”

Clemens credits his math ambitions to a high school calculus teacher. “He showed me how it could be interesting by giving me extra credit problems to solve on my own. I just gave it a try and found out that I enjoyed it and was good at it,” Clemens said. He also noted that Housman plays a similar inspirational role for him today. “David gets really excited about math, and I’m most inspired by people who can get excited about it,” Clemens added.

Despite all his success, Clemens was reticent to talk about why he was so good at math. “I’m not good at history or literature—those aren’t my skills,” he said.

When pressed on why he was so skilled in math, Clemens finally relented. “I’m probably successful because I do it a lot,” Clemens said. “I look up problems on the Internet, get some scratch paper and solve them for fun. My mind is just gifted that way.”