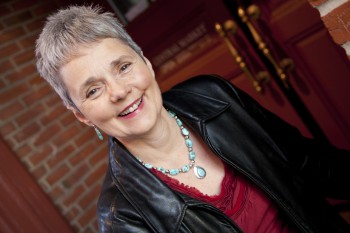 Shirley Showalter, former president of Goshen College, is preparing to publish her memoir, “Blush: A Mennonite Girl Meets a Glittering World.” The book is scheduled for release in September.

The writing of the memoir unofficially began about 10 years ago. She found encouragement after winning two first place awards and an honorable mention from a writing contest sponsored by a local newspaper in Kalamazoo, Mich.

“That led me to think, ‘You know, I could do a whole book,’” Showalter said. She began working on the memoir project in earnest in 2011 when she received the contract from Herald Press, the book publishing imprint of MennoMedia. She devoted the past two years of her life to the book.

As she was writing, Showalter created a schedule that broke the writing process down into producing a chapter a month, at about 20 pages or around 5,000 words per chapter. She also estimated that she spent, on average, about five hours a day writing over the past two years.

However, considering her related efforts like reading other peoples’ memoirs, keeping up a blog and connecting with possible future readers through Facebook or Twitter, she counts the writing life as a full-time job.

In a recent Skype interview, Showalter said she has always loved stories about other people’s lives. No matter if they were called biographies, autobiographies or memoir, “I gobbled them up,” she said. “I’ve always felt that there would be something to learn from every life. And there’s something to share about my own life.”

She described her book “Blush,” as about “growing up in Lancaster County in the 1950’s and 60’s.” The book talks about Showalter as a “curious, exuberant” child who comes up against rules and expectations in her Mennonite community in southeastern Pennsylvania.

“I have this experience that my own children didn’t have and even my younger siblings didn’t have of going to a public high school and wearing a covering on my hair, a visible symbol of my religious faith,” said Showalter.

The book is about how experiences like this affected Showalter both positively and negatively. Throughout the good and the bad, she said, she was always in touch with a “joyful, exuberant, curious spirit that saved me from being bogged down by anything too strict.”

“I try to keep that spirit, the child-like spirit, alive whether I’m confronting my father or the bishop or aspiring to go to college as the first person in my family on either side to do that,” she said.

Showalter stated that when a person reaches the upper years of their life, there is just a natural pull toward reflection and review. She sees that both older people and very young children are living in the same light. She said that in our middle years, we are moving more in the “external environment of this world,” but that the old and young are closer to their Creator.

From July 2011 to May 2012, Showalter and her husband, Stuart, moved to New York City to be with their grandson. From ages 4-14 months, she spent four to six hours a day with the baby. Showalter said this contributed to her motivation for writing. During that time, she also found stimulation from living in the city and writing about the country.

Writing a memoir takes a lot of psychological, emotional and even physical exploration. Because of this, Showalter found it helpful to return to her childhood home in Lancaster County.

Showalter said that she learned many things while writing “Blush,” including that she writes best when she is both honest and vulnerable. Talking with her mother once a week while she wrote also helped with her learning experience. “I recognized in new ways things I had always known, such as how unusual it was for her [Showalter’s mother] to have been the only daughter of an only daughter back in 1927 and how much I, as an oldest daughter, basked in concentrated maternal energy,” Showalter said.

When asked what the hardest part of writing her book was, Showalter responded that finding an overall structure to fit her life was a challenge. She eventually decided on a chronological organization with themes like humility and pride woven throughout the book.

Currently, the book is in its final stages of revision; there are about 90,000 words ready for editing. The manuscript is in the hands of two editors at Herald Press. Most of the changes being made now are more technical, like fixing typos or adjusting formats.

For more information on Showalter and her memoir, go to http://www.shirleyshowalter.com/, or “like” her Facebook page. On her website, she also offers a free memoir writing booklet and “Magical Memoir Writing Moments” with a picture and a writing prompt, sent right to your email inbox.