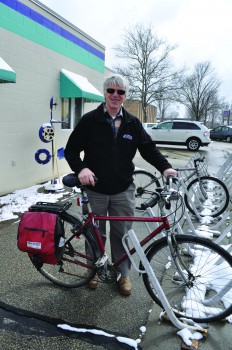 Not a minute passes for Glenn Gilbert without the static overtone of a hand radio, the buzz of a cell phone or the chime of incoming mail on his tablet.

“This is the latest and greatest,” Gilbert said of his Samsung Galaxy Player tablet. “I should say: ‘I like gadgets.’”

Gilbert explained that for a long time he was ahead of the curve when it came to the latest technology: the Goshen College Alumni Bulletin even featured Gilbert sporting an ancestor of today’s mobile device several years ago. Many devices later, Gilbert cannot recall which one was featured.

You might not expect someone as tech savvy as Gilbert to be into sustainability as well. Officially, Gilbert is the utilities manager for Goshen College. In recent years, sustainability coordinator has been added to his title. In 2007, Goshen College President James Brenneman issued a climate commitment for the college to become carbon neutral, and Gilbert was just the man for the job.

“There was never a job search,” Gilbert explained. “They took a quarter of my time and designated it for that purpose. It’s a good fit.”

Gilbert’s favorite of the arsenal of apps on his tablet is the camera.

“I took pictures I need to get back to the contractor,” Gilbert said. “He was asking how much of the floor molding for in the Union building they left behind … well, about that much.” Gilbert pulls up the picture of a roll of vinyl molding.

Another one of Gilbert’s favorite tools is the Log Me In app. This allows him to access the energy-usage-monitoring computer while out of his office. Could he possibly lower the temperature in President Brenneman’s office?

“Actually, I did that!” Gilbert admitted. “It’s kind of an embarrassing story.”

During convocation five years ago, Brenneman and Gilbert discussed the role of sustainability on the campus. As a prank, Brenneman was told of a new initiative — to lower the temperature of the president’s office to save energy. Brenneman agreed, expecting that the temperature would only be lowered slightly, but Gilbert lowered it to 55 degrees.

Later that week, Gilbert left on vacation, forgetting to adjust the temperature to something more pleasant. After arriving at the airport in Chicago, Gilbert called the office, fearing that the president had already made a complaint. It was February.

However, no complaint was ever filed, and the temperature was turned to something more tolerable. Crisis averted.

For someone who seems made for this job, with a love of technology and the environment, it is rather by chance that Gilbert ended up at Goshen College, especially given that he had never even heard of Mennonites or the city of Goshen until adulthood. Gilbert is a Michigan native. He recalls that from the beginning a love of nature was one of the many facets of his life. Gilbert describes his father as a “self-learned environmentalist” who taught conservation classes for 4-H. The outdoors was a major part of Gilbert’s life, whether he was collecting rocks or observing wildlife.

Gilbert’s mother liked to tell about when he was a boy he would come home from playing every day of the summer soaking wet.

“I’d fall into a creek or a pond or a mud hole somewhere,” Gilbert said with a chuckle. “I was one of those children who got to get into the woods before it was too late.”

After high school, Gilbert went to the Upper Peninsula of Michigan to study electrical engineering technology at Michigan Technological University. It was here that Gilbert first encountered Mennonites in the small town of Grand Marais.

Theirs was the only church around, which is why he began attending, but soon Gilbert found that the Mennonite teaching resonated with him.

“One thing that was different was the strong sense of community,” said Gilbert. “I was brought up that faith was an individual journey … but this idea that, no, your faith exists in community was something that took me a while to get my mind around. Now I find value in that; community is something that is very important to me.”

In 1983 Gilbert moved his family to Goshen, in part because of the Mennonite community. For a time Gilbert worked in South Bend for a phone company, but a position became available as an electronic technician at Goshen College in 1985. His first stint in the physical plant was in 1989 when he filled in temporarily as the plant director. Six months later, Gilbert moved into the new computer center, which had just been built across the street from Goshen College.

It was Gilbert’s technical know-how that brought him back into the physical plant, where he has remained to this day.

When Goshen College began to develop its energy management system, Gilbert was again the man for the job. He helped the physical plant to refine and control the complex program which controls every energy output on campus, including every light and thermostat.

“I could make the whole campus go dark,” said Gilbert, and added with a laugh, “I hold the power.”

That was in 1990. Now Gilbert has a new master project: converting part of the school’s heating from steam to a geothermal system, which pulls energy from water deep in the ground.

“When people ask me what I am working on, I tell them I’m working on my ‘summer project,’” Gilbert said. Even though it is well into winter, the geothermal facility, whose maze of multi-colored pipes is reminiscent of the screen saver of old desktop PCs, has a long way to go before the campus will no longer rely on natural gas.

Gilbert chose a heat pump system made in Goshen by a company called Chillit Chiller.

“They are one of the few in the world that make heat pumps of this size,” said Gilbert. “I learned about them by accident. They’ve sold them all over the country but they have never (sold) any here. For them it’s a chance to show off their work.”

Despite the fact that there is much to be done to make Goshen College more sustainable, Gilbert said he welcomes the challenge.

“Yeah, we could install solar panels and put in wind turbines, but I get a lot more satisfaction out of looking at an existing system and thinking ‘OK, what can we wring out of this?,’ and a lot of times this just takes good labor,” Gilbert said.

Gilbert brings his sustainability work home as well. One place he has installed solar panels is his own house. He is able to save and even generate so much electricity that he sells it back to the power company. He has also dabbled in construction; he has made two additions to his home and has plans for another project.

“This time I haven’t got the time to do it all myself,” Gilbert said of his plans to relocate a stairwell in order to enlarge the kitchen.

A strong work ethic is something that Gilbert appreciates, along with the communities supported by it. He frequents the Goshen farmers’ market and the Millrace, is a member of Assembly Mennonite Church and plays a purple trombone for the city chamber orchestra.

Gilbert is also a fan of the biking trend in Goshen. “If I have a choice between a vehicle and a bike, I always bike,” Gilbert said. He bikes to and from work. It helps that he lives only a mile away, but even the most dreadful of weather has not stopped him from biking for 27 years. He often takes his bike all over town as well.