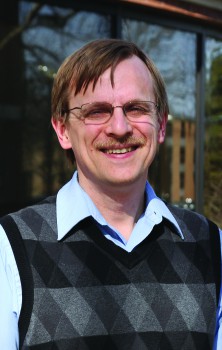 Beginning this fall, Goshen College will award a new science scholarship to students, thanks to the hard work of several planners and grant writers at the college.

Last month, the college announced that a National Science Foundation (NSF) grant totaling $598,000 had been awarded to the college. This money will become available over a five-year period and will fund the Leaf Scholarship, a new, need-based award possible for incoming first-generation college students with strong abilities in science, technology, engineering and mathematics (STEM).

According to David Housman, professor of mathematics, the grant proposal was first written and submitted in the summer of 2009. After two submissions and subsequent revisions, the proposal was accepted. Becky Horst, assistant registrar and grant writer for the college, has been the primary writer since the beginning. Rebecca Hernandez, associate dean for intercultural development  and educational partnerships, was also instrumental.

In its early stages, the grant writing was designed to attract talented Latino and African-American students to the college. Said Housman about the grant, “From the very beginning, it was thought of as an extension to the efforts of CITL [Center for Intercultural Teaching and Learning].”

Due to some recent changes in the specifics of the NSF’s wording regarding disbursement of these funds, the scholarship is available to first-generation college students with significant financial need. However, students of historically underrepresented ethnic backgrounds are strongly encouraged to apply.

The admissions office is in charge of advertising the scholarship, which will be a later-decision award due to its contingence on financial need.  Since it had been known that these funds would likely be available soon, applicants for the 2013-2014 school year were notified about the scholarship. A committee of three science professors has nominated four recipients of the award, who will soon be announced.

Housman spoke of the variety of leadership opportunities recipients will participate in at the college “to help keep them focused and supported as they are trying to achieve their goals.”  This award will be a “cohort-based model,” in which recipients will be involved in academic and leadership programs as a group. Housman is “excited to see how well it works. It’s modeled on other plans that help bring students to Goshen College.”

Although Housman is the principal investigator (P.I.) for the grant, and other science faculty are co-P.I.s, he emphasized the achievement this is for the entire campus, especially for the science departments and Center for Intercultural & International Education (CIIE, formerly CITL) in particular.

“It really is a school-wide thing,” Housman said. “I think it is a reflection on the success of the whole school, and especially on the math and science departments, as well as the CITL office.”

The criteria for qualifying for the Leaf Scholarship can be found on the financial aid office webpage. Anyone with interest in the award may contact the Goshen College admission office by calling (574) 535-7535 or by emailing admission@goshen.edu.