Ten professors and 15 students met in Newcomer Center to share a meal and create an improved agenda for the course requirements for incoming students. The general conversation was led by Ross Peterson-Veatch, director of curriculum, teaching and faculty development, who facilitated a presentation and dialogue on the new course requirements.

Earlier in the semester, Peterson-Veatch visited each of the eight section 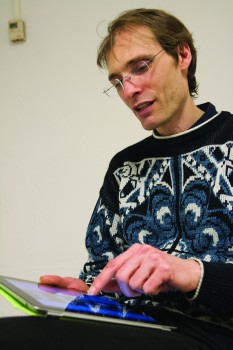 Kent Palmer, professor of informatics, uses ipads as part of the Goshen "Core" curriculum, which will undergo revisions for next year.

s of the CORE 100 classes and formed focus groups to ascertain from students what they had appreciated about the course, and what they wished to leave behind.

“The overall feeling was not good,” said Peterson-Veatch. “The clear sense from this assessment was that there is a critical amount of students who think the curriculum is a good idea, but it is poorly executed.”

The dinner was organized for further conversation and discernment because of the generally negative consensus among the first-year student body. Those present spent time reflecting on their own, discussing in small groups and eventually gathering back into a larger body to propose an improved model.

Within a week after the revision dinner, a new “Goshen Core” curriculum was approved. The course that produced the most negative results–the integrated CORE 100/102, or “Identity, Culture, & Community”–will be reduced from a four-credit class with three sessions a week to a three-credit hour class that meets twice a week.

“This is a work in progress,” said Peterson-Veatch.

For Peterson-Veatch and many other faculty members, it has been a three-year long work in progress.

Peterson-Veatch, along with a team of other faculty and administrators, began brain-storming approximately three years ago about the idea of developing a new set of course requirements for incoming students. The initial planning period took two years, and eventually putting the program into a feasible structure took an additional year.

Peterson-Veatch sees the program as a step towards more integrative, thoughtful learning than the previous general education requirements were developing.

“This is a curricular experiment that is more aligned with the vision statement than the previous one,” said Peterson-Veatch.

Creating space for students and faculty to have a voice in changing their own education by facilitating revision-oriented conversations like the dinner on Tuesday night will become a priority for semesters to come. Forming focus groups each semester is expected to improve student responses to the curriculum.

“I am hopeful,” said Peterson-Veatch, “because we can change things about the execution of the courses.”