Don’t sacrifice fiction for the Constitution 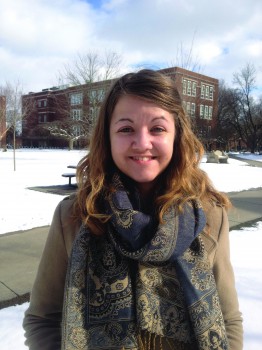 If there is one confession that I would rather not openly admit at any point in my life, it’s that, as a child, I pretended to be a dog and was known for walking up to people in restaurants and smelling them (where were my parents in all this? Knowing them, probably laughing in the corner. But still, good grief). Only slightly less incriminating, though, is that I’ve read books like “The Hunger Games”… and liked them.

To make matters worse, I’m seven-eighths of the way through a bachelor’s in English. This, I feel, grants me a small degree of literary pretension; after all, anyone who has slogged through “Beowulf” and “The Iliad” is unofficially entitled to a little posturing about the likes of Stephanie Meyer.

But sophomore year, the first time I read “The Hunger Games,” I remember shutting the book with a distinct feeling of shame. It was 3:30 a.m. on a school night and I had just plowed through a young adult novel that was pretty much a fad with semi-colons.

It didn’t have acknowledged literary merit. It didn’t have a deep theme. According to the standards set down by my kindergarten through twelfth-grade English classes, it was a waste of time, in other words.

I’m not the only one questioning fiction these days. A nationwide program, called the Common Core: State Standards Initiative, was launched recently to address poor reading comprehension in students up to twelfth grade.

It is essentially a literary Louisiana Purchase. According to the program’s website, “the standards require certain critical content for all students, including: classic myths and stories from around the world, America’s Founding Documents, foundational American literature, and Shakespeare.” Fiction will be traded for nonfiction in school reading lists to get kids back into the green reading comprehension zone.

When I heard about this, my heart stuttered. I like Shakespeare—English major, you know—but America’s Founding Documents?

I’m part of the negligible percentage of English majors that specialize in fiction, so I’m biased. But growing up, I’m confident that I learned just as much from novels as from school—barring math, and honestly, once I got to division, the subject got progressively less useful.

Good fiction doesn’t hit you over the head with its lesson: the reader gets it because she or he is learning it along with the characters. I learned ideas of racial injustice and the destruction of childhood innocence because I was caught up in Scout’s story in “To Kill a Mockingbird,” not because I did in-class essays on it. This is, perhaps, not the place to argue against in-class essays. I’ve found, though, that if the fiction is convincing and written well, you don’t need them.

So why are school boards turning to the Constitution?

Reading comprehension improves with reading, as the Common Core program suggests. Incorporating “Twilight” into the curriculum probably won’t improve test scores, it’s true, but what about novels that are liked and that provide quality reading?

Maybe reading comprehension is suffering due to the choice of certain fiction. I’m seven-eighths of the way through an English degree, and you know what? I still don’t like “Heart of Darkness.” I get that it’s about imperialism and the ironic device of madness. But I never hid under the covers reading Joseph Conrad until the wee hours of the night.

And the odds that any students will get that read-under-the-covers feeling, that love for language and story, are greatly diminished if students aren’t required to read fiction at all.

Theoretically, I can appreciate what Common Core is doing. The program wants students to ace reading comprehension—so they are prepared to be “best positioned to compete successfully in the global economy,” as the mission statement says—and the initiative is actually initiating a plan. I do respect that.

But I cannot support a program that diminishes the importance of novels. Fiction is not only entertainment; it is the beauty of language. As John Keating—o captain, my captain—from Dead Poets Society would say, we read and write because we’re human, and as humans, we are filled with passion. Fiction is the result of being human. In the end, I can only hope that novels will prevail in schools.

Because in the end, I know there’s a much greater chance that I’ll curl up in a chair with the second book of “The Hunger Games” than with the Constitution.