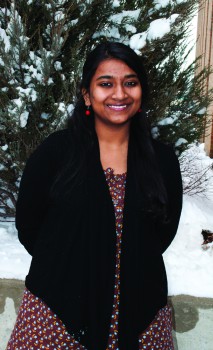 Prashansa Dickson is a first year psychology and sociology double major from India. Here, she reflects on how she ended up studying at Goshen College and her culture.

How did you end up studying at GC?

I was introduced to GC because there have been many Woodstock School alumni [a high school in India] who have come here over the years. There are also several faculty that have worked both at Goshen and Woodstock.

Tell us about yourself and your family background.

My parents are missionaries from the south of India from the state Tamil Nadu. Due to the nature of missionary work of my parents, we moved to different places.

I have one older sister who was born there, and my parents moved to the north of India to be missionaries in a city called Allahabad. I stayed there until I was about 12, and then my entire family moved to New Delhi, which is the metropolitan capital of India. I was about to go to school there but we moved a lot around Delhi, and I ended up going away to boarding school at Woodstock while my family stayed in New Delhi. I attended Woodstock up until I finished high school, then I came back to New Delhi for the summer before college and started attending an Indian college for a few weeks before eventually joining Goshen in the fall of 2012.

What are some recognizable parts of Indian culture?

Several classic dances are often recognized as Indian pop culture. The bright colors and noisy anklets with bells are also often associated with classical Indian culture. However, more often Bollywood and cheesy accents and romance stories with a lot of singing is associated with Indian [culture]. A lot of clothes and fabrics are also very recognizable cultural aspects. People tend to know very easily if a certain cloth has a textile pattern that seems Indian.

What are the traditional customs of food, holiday and religion in India?

The food is very varied in all the different parts of India. But we love our various spices. I have been exposed to diets very heavy in cumin, aniseed, red chili, black pepper, garlic, turmeric and many other spices that are carefully mixed into delicious curries with meat and vegetables and are often eaten with either plain white rice or flat bread made from flour dough that is baked over an open fire.

Rice is a very important staple food in every kind of Indian culture. What we eat with the rice differs from region to region. As for holidays, since there are many different religions represented in India, we have many festivals that result in many holidays for the children. The Hindu, Muslim and Christian holidays are the most commercialized and celebrated. The Sikh holidays are a little milder and more revered as a religious event while the Hindu, Muslim and Christian holidays are usually a time to relax, have fun and cherish our rich cultural history and enjoy the bright lights and colors that result from out festive celebrations.

Any particular similarity or difference you have noticed between the two cultures?

The society here is definitely very different than that of India. Back at Woodstock, we create a kind of community where you can be so close to everyone that everyone is treated like family. To us, family is where there are no formalities. You can wake each other up in the middle of the night, show up unannounced at their house for meals, ask them to buy things for you and basically ask for any favors and not be accountable to return those things because when you’re family, no one keeps tabs on what you ‘owe’ each other.

This environment developed for me [while] living with all my friends at boarding school. We loved each other like family. Even today I know if I show up at any of their doorsteps at three in the morning, demand they take me out for dinner and then sleep in their house, they will oblige me not only without being offended, but also with so much happiness and love. It is a kind of community where everyone is always looking out for everyone else, and although you are encouraged to be your own person, community, humility and modesty are virtues.

Since I have been here I have observed this is quite different and I am very intrigued by the societal norms here. I am expected to be confident and individualistic here. I must be able to state my strengths and believe that I am the best at what I do. I don’t think that the culture here disregards humility and modesty; however, I think there is no room for those in the communal world. It is an interesting change and I often miss the kind of, almost ‘demanding’ friendships I could have with my friends from Woodstock. But I think I am doing pretty well with my friends here, slowly converting them to my ways, and they welcome all my obnoxious traits with open arms.

India is home of many tribes and religious groups. How do these differences get along in society?

There are certainly many differences of cultures and religions in India. Throughout history this has resulted in drastic events such as the many massacres of Hindus by Muslims or Muslims by Hindus. The biggest scale of deaths resulted in the partition that happened towards the end of World War II when India got its independence from Great Britian in 1947. As the English drew a map of India dividing along lines that were mixed communities, in the rush to get all the Muslims to Pakistan and to get all the Hindus across to India, millions of lives were lost. There are horror stories that the grandparents of my friends can still recall of that painful time.

More recently, however, there have been continued animosities between the Hindu and Muslim crowds. There are several small scale uprisings and riots that break out often, and there have even been several persecutions of Christian missionaries in the central-eastern part of India. So, I guess we don’t really live in harmony.

In our small community of Allahabad when my parents had just become missionaries, we experienced some tense situations. Being in a very evenly distributed Islamic and Hindu city, complete with several universities filled with energetic college students, we lived in a very volatile city. As I grew up there I remember having to live through many riots that happened, and the way to deal with antagonism towards your own religion, really, is to not retaliate. There needs to communicaton and patience in order to resolve conflict between the different religions. The government has done a much better job of being a secular institution in the past five years than it has before and this has helped the current generation to be very well integrated with other religions. There are not too many conflicts nowadays.

Can you tell us a little bit about Bollywood?

Bollywood is a very glamorous world. I do not know too much about it, and having gone to an international school which was very American, I learned more about Hollywood than I did about Bollywood. The industry is very wealthy and the people are not usually approachable by the public. Everyone who is recognized and important always lives in the big cities. Mumbai is like the LA of India: many film industries and Bollywood stars live there and many small town people move there to try and make it on their own. It truly is a parallel of Hollywood but not as wealthy, not as shiny and not as extensive. But relative to our country it is a very posh environment with a lot of exclusive parties and a lot of money.

–       Hollywood might get more press, but Bollywood rules the film world. India’s film industry is the world’s largest.