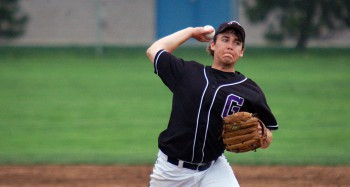 After a rough outing in Florida with a number of late-inning losses, the Maple Leafs finally found their stride to grab their first win of the season over Holy Cross College in South Bend on Monday.

The Maple Leafs were led by Spencer Oversen, a senior and Goshen native, who scattered five hits in his second career complete-game shutout and struck out three.

Meanwhile, Goshen tallied six runs off of 11 hits. The Leafs scored twice in the first inning, while adding single runs to their score in the fourth and fifth innings. A two-run double from left fielder Matt Austin, a junior, made the score 6-0 in the sixth and that would be the final number.

Corey Johnson, a senior, was 3-for-4 and advanced a runner on all three singles.

However, the Maple Leafs could not come out ahead in the second game of the doubleheader, as they dropped to Holy Cross 2-1, with both of Holy Cross’ runs coming in the sixth inning. Alex Mosbarger, a first-year, took the ball as the starting pitcher and gave up only two hits in the first five innings. A walk, a triple and a sacrifice gave Holy Cross its first lead of the day at 2-0.

In the top of the seventh, Goshen put two on with one out. Designated hitter Paxson Miller, a senior, reached on an error as Johnson scored to make the score 2-1, but pinch-runner Josh Schlabach, a junior, was retired returning to third base. A walk and a hit batter loaded the bases to put the tying run on third, but a popout would end the Maple Leafs’ day. Mosbarger suffered the loss, falling to 0-2 on the season, as Goshen could manage only three singles behind him.

Goshen College is scheduled to make their home debut in a doubleheader against Concordia University this Saturday. With nine games in the books, the Leafs are statistically solidly in the middle of the Crossroads League, ranking fifth in the league in both runs batted in per game and earned-run average. Conference play begins with a doubleheader at Taylor on Tuesday, March 19.