Weather in Goshen is a gift from God 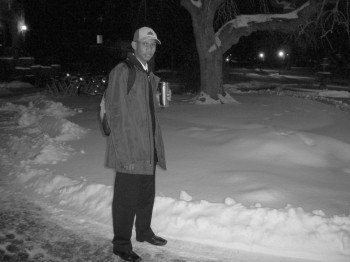 Coming from Mauritania, where the temperature regularly soars over 100 degrees, I have been paying a lot of attention to the rise and fall of temperature in my new home, Goshen—especially during the winter. What caught my attention is the apparent negative correlation between the average temperature and how far I live from the school.

During my first winter in Goshen in 2011, I got to see how bad January and February can get. One day Goshen received an incredible amount of snow; enough to close the school. This was only the second time in the college’s history that classes were cancelled due to snow. In January that winter, the temperature got as low as -8 degrees (F), and the mean temperature was 20.2.

That winter I lived on campus, and through the windows of my room, I could see the white, empty streets; it looked like martial law had been declared, except that there were no soldiers in the streets. Looking through the window was enough for me to get depressed. Why? I am from the Sahara desert, and the snow was telling me that I was in the wrong place!

Then last year I noticed a big change in the weather: the winter was mild compared with the previous one. It was warmer for walkers and less dangerous for drivers. The snow came on time, but the average temperature was a lot higher. The lowest temperature in January of last year was 3 degrees, and the mean temperature was 29.1.

During this time, I lived three blocks away from the school. I had to walk sometimes, so I was thankful to God that winter was not as bad as the one before. At least I did not have to choose between walking on hazardous roads and sinking my shoes in the snow on the sidewalks.

Goshen residents were even more surprised about the weather this winter. It started snowing late, and the winter has been warmer than usual.

January, the heart of winter, had few very cold days. That is not to say it was never cold. On Jan. 24, for instance, the temperature went down to zero. However, most of the other days were noticeably warmer. According to the National Weather Service’s forecast office, the temperature topped 40 degrees on nine days, and it soared above 50 degrees on four days. In fact, on Jan. 12, the temperature got to 60 F, which was the highest temperature in January 2013.

This winter, I live a mile and a half away from the school, so I have to bike or even walk sometimes. This made me think how hard it would be for me if this winter was like last winter or the one before.

I know a lot of people would explain these changes in the weather in Goshen with global warming. Yes, it makes sense to say that the earth is getting warmer and warmer due to climate change.

For example, I made a comparison between the climate change in Goshen and Athens, Ohio, where I lived before moving to Goshen. The website Weather Warehouse shows that the significant change in temperature didn’t take place only in Goshen.

All this is to say that I do believe that the earth is warming, and that the climate is changing everywhere, not only in Goshen. But my explanation for the weather change in Goshen will remain personal.

To me the reason for warmer winters in Goshen is that God knows that I am from the desert, so He is making sure that the farther I live from the school, the better winter gets.

This parallel was threatened strongly this month when the weather got extremely cold. One day, I woke up, and when I looked through the window, I was surprised to see how much snow had fallen during the previous night. My housemate’s car got stuck, so my housemates and I had to shovel the snow to get the car out. But overall, it still seems that the winter gets warmer as I live farther from the school. And to that I say: thank you, God!