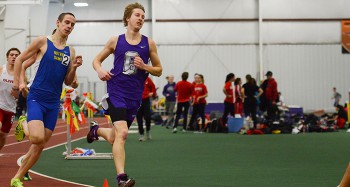 As the 2013 indoor track season reaches its end, the Maple Leafs seem to be peaking at the right time. This was evident Friday in the Goshen College race walk, as the hosts swept the top two spots on both sides of the gender divide.

Jake GunderKline, a senior, and Mitchell Brickson, a sophomore, finished first and second respectively, with GunderKline posting a season best of 13:39.1. GunderKline and Brickson are ranked fourth and seventh in the nation in the race walk.

Meanwhile, on the women’s side, Erin Helmuth, a senior, and Abby Dunn, a first-year, placed first and second in the event as well. This was Helmuth’s second consecutive year winning the event, with a time of 15:18.8. Dunn was close behind with a time of 15:23.1. Helmuth and Dunn are ranked third and fourth nationally among collegiate race walkers.

At Purdue University on Saturday, the bulk of Goshen’s team finished its indoor season. A trio of Maple Leafs finished in the top five of their events: Brock GunderKline, a senior, was third in the 600 meters with a time of 1:26.95 that beat all other NAIA runners; Tim Lehman, a first-year, was fifth in 1:27.65; and Jordan Smeltzer, a sophomore, was fifth in the 5,000 meters, with a time of 15:48.34.

For the first time this season, no Maple Leafs qualified for nationals, but Goshen will have six entries in the national meet that begins on Thursday, Feb. 28, in Geneva, Ohio. All six Leaf entries will compete on Friday, March 1: Brickson, Dunn, Jake GunderKline and Helmuth in the race walk at 12:25 p.m.; Sam Jones, a senior, in the high jump at 3 p.m.; and Lucas Harnish, a first-year, in the 800 meters at 4:30. The high jump finals follow the preliminary rounds that afternoon; the 800-meter final is set for 1:35 p.m. on Saturday, March 2.