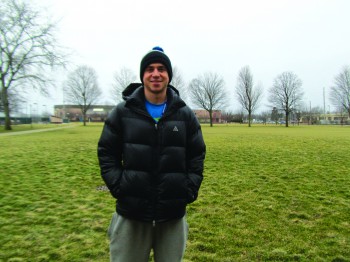 Alejandro Davalos is a senior business major from Peru, the third largest country in South America. Peru has a large indigenous population and contains the famous Incan ruins of Macchu Picchu.

What inspired you to come to the U.S.?

I came to GC when I got a tennis scholarship. But in my second year I changed to soccer, as it is really my favorite sport. It was a great opportunity for me to come to the United States and experience life in a first-world country.

What do you miss the most about Peru?

Friends, family and going out on weekends. Lima has a lot of different restaurants, food, bars, casinos and clubs, which makes weekends a lot of fun. I also go to the stadium to watch soccer a lot, something I cannot really do now. Soccer is the biggest sport in Peru and people feel very passionate about this sport.

Tell us more about Peruvian food.

Seafood is among the most popular foods in Peru. Most plates have yellow potatoes, [whereas] here in the U.S. white potatoes are commonly used. Yellow potatoes come from the Andes Mountains and they have more taste. Some [popular dishes] include: ceviche (a seafood dish), causa (a potato dish), lomo saltado (stir fry over rice) and aji de gallina (a creamy chicken dish).

Some people like eating “pachamancas.” They take a lot of time, though, and it is not very common in Lima, the capital city. It is mainly done by the people who live in the Andes mountains. Pachamancas involves cooking the food underground with hot stones and [uses] mainly pork, chicken and potatoes. Peru is one of the top potato-producing countries in the world. We have so many varieties of potatoes, which one thing that distinguishes us.

What are your plans post-graduation?

I am going back home and have a couple of interviews set up for a soccer team in Peru. But I would like to eventually start my own business in the near future.

Besides studying, what extra-curricular activities have you done at GC?

I have been on the soccer team for three years. In my junior year, I became an All-American after leading the team in scoring. Unfortunately, my senior year I could not play due to kidney problems. Last summer, a doctor in Peru gave me medicine that almost killed me. This hampered my soccer activity here at Goshen College. It has taken me a long time to recover after that incident.

Meanwhile, I am coaching a soccer team in South Bend twice a week. It is a team in the South Bend Picsa League for ages 8-to-12 years old.

What is it Peru famous for other than the ruins of Machu Picchu?

Peru is famous for its great and wide variety of food. In the city, most people dress similar to here in U.S., but surfing brands are more common, such as Quiksilver and Billabong. In the mountains, they dress like the Incas used to do – they have gowns that cover most of their body. It is a different style. Almost everyone in Peru is Catholic, but my family is not that religious and neither am I.

–       Peru’s Macchu Pichu was named one of the new seven wonders of the world in 2007, along with the Taj Mahal of India and the Great Wall of China.

–       Spanish is the most widely spoken language in Peru. Quechua and Aymara are indigenous languages mostly spoken in the mountains.

–       The “New York Times” calls Peruvian cuisine the best-kept secret in South America. Lima has over twenty cooking schools and is at the heart of the new Andean food movement called Novandina, today considered Latin America’s most sophisticated cuisine.