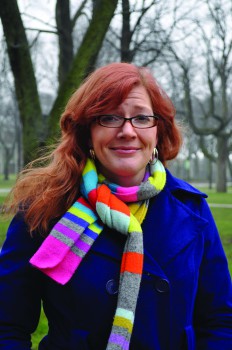 Over the last year and a half, the Goshen College Wellness and Health Center has seen its fair share of change. Diane White, nurse practitioner, left campus in 2011, followed by Char Hochstetler, campus counselor, in 2012, but as of this semester the Wellness and Health Center has a new occupant. On Jan. 7, the GC community welcomed Jennifer Beer to campus, where she will serve as the new campus counselor.

Beer is an Elkhart native and currently resides there with her husband, her three children–ages five, six and 13–and the family dog, an Australian shepherd named Max. She grew up on an angus cattle farm in the area and showed animals with the local 4-H. After graduating from Concord High School, Beer attended IU Bloomington where she graduated with a B.S. in biology and a minor in psychology.

From Bloomington, Beer migrated east to the United Kingdom, serving a year in London with Agape, an international Christian organization that ministers to students. While in Europe, one highlight was the opportunity to lead student group trips to Spain and walk a portion of El Camino de Santiago, a medieval pilgrimage route.

Upon her return to northern Indiana, Beer put her degree to work as a laboratory assistant. However, she did not feel particularly drawn to that work and soon decided to pursue her master’s in counseling from Bethel College (Ind.).

“I looked into a lot of programs in different places, but I have a big family–my mom has a lot of siblings who are still in the area, and I had six nieces and nephews by that point–and didn’t want to leave because I already had roots here,” Beer said.

Since completing her M.A., Beer has worked in a variety of settings with a range of clients. She spent time at the South Bend Juvenile Justice Center and the (Elkhart) Central High School, in addition to her latest work at Dr. Diane Cook’s private practice in Goshen. Beer says that most of her work has been with adolescents and family issues, substance abuse and conduct disorder.

Outside of work, Beer enjoys biking, camping with her family and spending time outdoors. The Beers are also frequent zoo-goers. “Wherever we go, we visit the zoo. My husband takes pictures of all the animals. I don’t really know why, but that’s what we do,” she says.

Other interesting facts include the Beer family’s preference for Linway Cinema over Encore in Elkhart. “The chairs at Linway are better and the floors are less sticky,” Beer said.

Overall, Beer is very excited to be on a college campus. “I have worked a lot with teens and adult women, but never much with college students, so I am looking forward to that change,” she said. Beer has enjoyed her time on campus and has been impressed with the students she has met thus far, deeming them nothing short of “awesome.” Even though she is already familiar with the wider Goshen community, Beer looks forward to this opportunity to better acquaint herself with the GC student population and the overall environment of the campus.

Although she is new on the GC scene, Beer already has some vision for the future, with hopes of making self-defense and assertive communication classes available to students, among other things. But above all, Beer simply seeks to make the counseling center “a place where students feel safe and comfortable — a place where people can come, even if they do not connect well with me, knowing that I will refer them to someone who can offer them the help they need.”

Beer will make her public debut at convocation on Feb. 11, where she will speak on the importance of self-care in relationships.