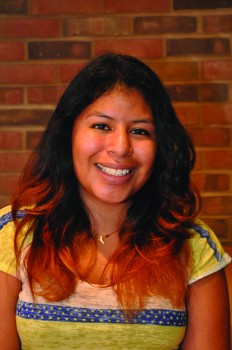 Yuli Whiteman, a first-year music education major, has a unique attachment to three continents. Whiteman was born in Colombia, grew up in Australia and came to Goshen College from India.

Tell me a little bit about your background.

I am 19 years old and was born in Colombia. I was adopted when I was 3 months old, and grew up in Australia. But three years ago, I moved to India with my parents. Now, I consider myself Australian and Colombian.

My brother and I are both adopted, but we are not biologically related. In Australia I lived about 10 minutes walking distance from the beach, where I could take my dog for a swim and go surfing or sun bathing. I lived on the central coast, about two and half hours north of Sydney. In 2010 my parents were offered jobs at Woodstock School, in Mussoorie, India. That is where they live now.

What was it like moving to India from Australia?

India is a beautiful country. I live in the mountains of Mussoorie where we are away from the hustle and bustle of the Indian city Dehradun, which is about an hour down the mountain. I definitely experienced culture shock when I arrived there. We arrived from Singapore, it was in the middle of the day and it was 37 Celsius. As soon as we stepped out of the airport, it was like every person and his/her dog (literally) had come to see us. My family looked strange — two white parents and two brown kids — and people still look at us strangely when we travel around India. The food at first was far too spicy for me and I was afraid to touch anything because of germs. If you come to India thinking like that, you aren’t going to have a good time. Ain’t nobody got time for that.

For me, getting used to Indian culture and the way the people live in the country is like getting into a hot tub. It is like, at first when you step into it you test the waters, get into it slowly and then it’s all good. India has really grown on me and I love it.

How did you end up at Goshen?

I came to GC after William Velez from admissions flew to my school in India. At first, I was considering not coming to Goshen. But when my college counselor advised me to come along and see how it went, I started to consider it again, especially when I met with Will. We talked about Goshen and I was accepted, and here I am studying music education.

What are the most recognizable holidays in Australia?

Australia Day, which is on Jan. 26. That’s the biggest day in Australia — everyone just has a great time and celebrates being true blue Aussies. ANZAC day (Australian and New Zealand Army Corps) is on Apr. 25. On this day we remember those who fought at Gallipoli during WWI. At school we would be called to assembly and stand in silence while the “Last Post” was played on a trumpet. Other than that, the nation stops on Nov. 5 for Melbourne Cup Day [a horse racing holiday].

Australians are very friendly people, especially when you find one overseas. Just say, “G’day, mate!” and they are your best friend. We celebrate our culture whenever we can and we are very proud of being Aussies.

Tell us a bit more about Australian pop culture.

We have a huge surfing culture, as most of the population lives on the coast, so surfing is very popular. When people think of Australian pop culture they think of Mel Gibson, Naomi Watts (King Kong star), Russell Crowe, Nicole Kidman, Chris and Liam Hemesworth (Aussie brothers in The Avengers and The Hunger Games), Rebel Wilson, Hugh Jackman and Ned Kelly.

What are some famous Aussie foods?

We have many delicacies, such as pavlova, a meringue-based dessert. It has a crisp crust and is soft and light inside. It is so good!

We also have vegemite on toast. Personally, I don’t like it. A lot of people say Aussies like to have vegemite. It’s made from yeast extract. All Aussies love a good meat pie, one that is filled with savory ingredients. Another thing all Aussies enjoy is a barbecue where we eat meat and “throw a shrimp on the barbie,” or as we would say “chuck a prawn on the barbie.”

What do you miss the most about Australia?

It’s warmer in Australia. I also miss being surrounded by Australian accents because we have so many slang terms that would not make any sense to you or for anyone who is not an Aussie, but only to us. It’s how we speak.

What are your hobbies and what do you want to achieve in your life?

I like to listen to music, play my guitar, have a grand time and eat. I love to eat.

My goal is to use my degree to travel the world just as my dad is doing, and like my cousin, who currently teaches in Jordan.

–         Australia was once a British penal colony where thieves, murderers and others were incarcerated.

–        Tasmania, an island state of Australia, has the cleanest air in the world.

–         Australia is home to many unique animal species, including the kangaroo, bilby, wallaby, koala and dingo.