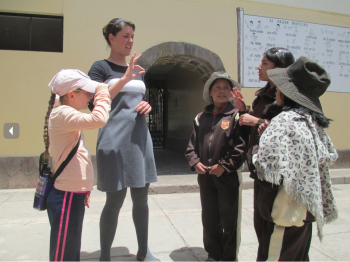 Rosa Wyse began her mornings in Peru with a mug of chamomile tea, a salted avocado and a conversation with her deaf host parents, Rosio and Rolando. Knowing little Peruvian sign langauge, Wyse struggled at first to communicate with her parents–especially her dad, Rolando. Over time, though, Rolando warmed up to Wyse and loved to tell her Bible stories and Peruvian folk tales.

“He would get all puffed up and sign ‘I’m an Incan warrior!'” Wyse said of her host dad. “He loved telling stories and being goofy. He reminded me a lot of my dad back home.”

Wyse was one of five American Sign Language students who participated in the ASL Peru SST unit that began last semester. Each of the ASL students worked with the deaf community and lived with host families with deaf members. They also worked at schools that aided the deaf in learning sign language and served children with disabilities. One school, called San Martin CEBE, in Cusco, separated the deaf students into a different room because they saw the deaf as mentally handicapped.

“I assisted the teachers at the school, which ran from 8 a.m. to 1 p.m.,” said Anna Latsha, one of the ASL students on the trip. “I would cut out crafts and do stamping for the teachers.”

The ASL majors helped teach the students how to finger spell their names in sign language and use beans to count numbers during math lessons. They also showed the kids how to sign the snacks they brought to class–cracker, tomato, bread.

The hardest part for many ASL students was beginning to understand their host families, as Peru has a different way to sign than American Sign Language.

“There was an ASL interpreter in our Peruvian history class,” said Christine Stubblefield, a junior ASL major. “Some signs were very different, and some were similar to ASL signing. Some signs were the same, but had different meanings.”

Wyse, meanwhile, struggled with signs that looked the same but have different meanings in Peruvian and American sign langauges.

“I was always signing ‘I’m fine,’ but it turns out that sign means ‘Go away, stop bothering me’ in their sign language,” Wyse said with a laugh. “I quickly learned the difference.”

During the study portion of SST, the ASL students lived in Lima, where they took sign language classes. There, Mia Engle lived with a deaf mother and a hearing son. The language barrier between the son and Engle proved to be a major challenge. The son did not know sign language, so he mouthed words to his mother to communicate.

At school, one of Engle’s ASL instructors was an interpreter who regularly appeared on Peruvian television. Engle said it was quite the experience to be able to learn from the person who her family watches on TV all the time.

One thing the ASL students noted about the Peruvian deaf community was how tight-knit it was despite the discrimination they faced from society. Deaf Peruvians are considered outcasts and do not receive the same rights as other members of society. The deaf are not allowed to marry in the church or drive a car. In spite of this, the deaf community continues to thrive.

“The families were already so interconnected, they would seek each other out,” Engle said. “Deaf people would meet in places almost every day. The deaf community was fantastic and my host family was really involved.”

All the ASL students met up with each other and their host families at these functions. Every Sunday, for example, they attended community volleyball and soccer practices where deaf athletes could train for the Deaf Olympics.

The ASL students all agreed that getting to know their host families was the best part of their SST experience.

“I loved my host parents on service,” Wyse said. “We would talk late into the night. They really felt like my own parents.”