A food critic gets a taste of her own medicine 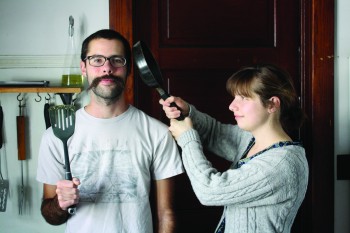 After my countless food reviews (four in total), I figured I should lay out my qualifications for this job. I do this in hope that this will be enough practice for writing resumes, as I should probably make up for not signing up for the college’s resume writing workshops.

My qualifications are thus: I enjoy eating the finest quality food possible, and when that’s not an option, I simply enjoy eating. This is my greatest strength in life, along with the fact that I really, really like Fridays. All the qualifications after this are filler and will be used to appeal to a wider audience and make me more marketable, such as the little bit of French I know, which surely counts as my second language. Or the time I shook the hand that shook the hand that shook Obama’s hand, making him a totally useable reference. But I guess a review of my own culinary concoctions would be the best showcase of skills.

Now, moving on to the food. Last weekend, I invited my brother Austin over to make curry. Austin whipped up the curry with some potatoes, onions, a pepper, some coconut milk, tomato paste and a healthy dash of curry powder. It bubbled and boiled for a while, resembling a volcano, and over the course of time began to match the vivid orange color of the wall. We both looked from the curry to the wall, astonished at our color mixing abilities and questioning which was more unnatural: having such orange walls or such orange curry.

I made the naan. Not my best work, but acceptable. And, like all unadmitted failures, was “a learning experience.”  The problem was in the overzealous use of flour and reluctance to keep mixing by hand to get the critical ratios. It was also a bit thick, but that was a naan-issue in the whole scheme of things.

We ate naan and hummus, then rice and curry. Midway into our curry bowls we realized that every bite we took expanded twofold in our stomachs. Bemoaning our fates and still shoveling in spoonfuls, we tested the limits of our stomachs and the strength of the buttons on our pants.

As you may be able to tell, it was an impressive meal for two college students if I do say so myself (AND I DO). It wasn’t the best meal we have ever made — our pizzas are far superior to most other things we make — but a satisfactory meal nonetheless. All you other college students may be okay with your Ramen occasionally jazzed up with peanut butter, but as for me and my brother, we like to make and eat good food.