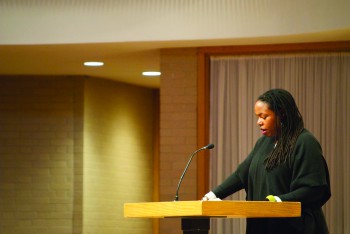 Dana Johnson, a novelist who now teaches at the University of Southern California, was a guest speaker on campus for the Martin Luther King Jr. events this past weekend. The California native has won numerous awards for her writing, including the Flannery O’Connor Award for Short Fiction.

During her visit to Goshen College, Johnson read excerpts from her 2012 novel Elsewhere, California at a special reading on Saturday evening and during the extended MLK convocation Monday morning. Both readings were well attended and enthusiastically received.

Elsewhere, California is a coming-of-age story about an African-American girl growing up in the suburbs of Los Angeles. The novel explores race, identity and alienation, all themes that have emerged from Johnson’s own experiences.

Johnson began writing as a young child but became more serious about writing in her twenties. “I wanted to start writing the minute I learned to read,” she said. “Books saved my life. I wanted to duplicate what I read.”

Johnson gets inspiration for her writing from her own life. “I think about what’s going on in the world or in front of me – politics and human interaction. Or I’ll hear a line of dialogue and see where I can go with that,” she said. Johnson also admitted that her work was partly autobiographical, but that she added material when the plot needed more action than her own life.

Much of Johnson’s writing deals with issues of class and race, including Elsewhere, California. In one excerpt from the novel, the teenage characters learn what it means to be in a cross-cultural friendship. Johnson describes her book as “talking about assimilation and what it means to be partially born and raised and then move to another neighborhood with other classes and what that means. Often in my short stories I’m addressing these things in one way or another.”

In encouraging aspiring writers, Johnson recommends to “think about what really matters to you; what you feel most urgently. Don’t hold back when articulating yourself.”

Students who attended Johnson’s Saturday performance and workshop shared their own written work on Monday afternoon.