Marvin Graber: A life filled with light, living in the dark 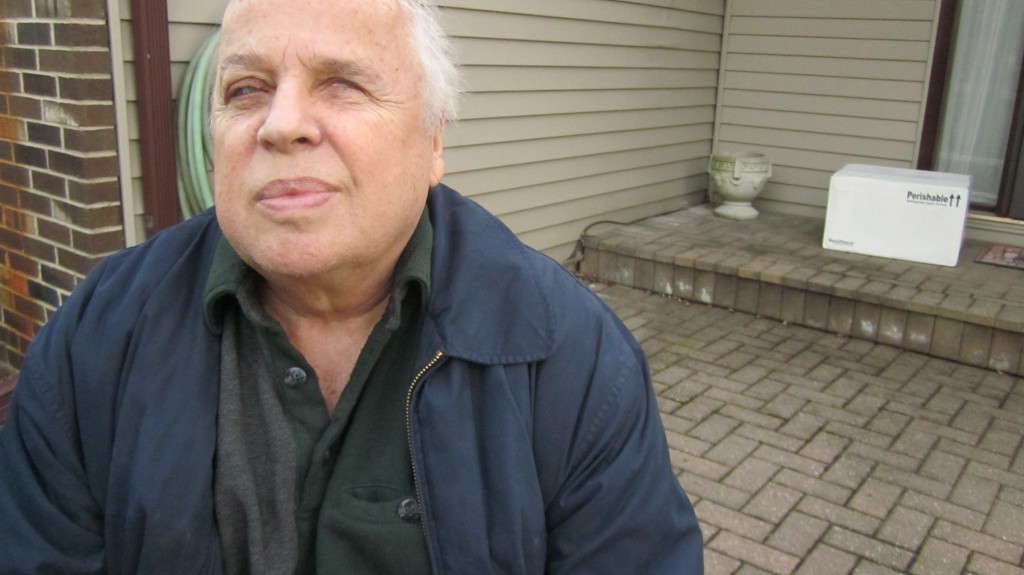 “The color is cranberry metallic,” Graber said. “I can imagine the red and the sparkles of the metallic. It has purple, red and maroon pearl chips in it, a black convertible top, black interior, black tires, white letters and chrome wheels.”

He went on to describe the engine parts under the hood, including the power steering and power brakes.

Graber can provide an exact description of his car despite the fact that he has never seen it or driven it — because he is blind. He lost his vision at age 10.

“If someone says a color, I can picture it in my mind,” he said. “For a person who has never had a visual image of anything, they can’t imagine it.”

“I can imagine a tree standing out in the middle of a field,” he said. “A person that’s never seen can crawl up and feel the branches and the leaves, but it’s nothing that they could ever visually imagine.”

Graber spent his 10th birthday in the hospital. The tumors developing in his brain and down his spinal cord burst the blood vessels around his optic nerves. The hemorrhaging from the meningioma caused visual impairment.

The doctors were able to locate the tumors by injecting a drug containing mercury in Graber’s system. “This drug was attracted to the tumor,” Graber explained. The mercury clung to places along his spine and marked where the tumors were located.

“Cancer treatment before the days of chemotherapy was crude,” Graber said. He was asked to lie on his stomach for hours as the doctors used an electric needle up and down his spine. Every time the needle hit a marker, it would burn a spot on the sheet of paper that illustrated Graber’s back.

“I took radiation,” said Graber. “Mom called it an elephant’s trunk; it came out from the wall and had a square end on it.”

The doctors would lay lead-lined squares on either side of Graber’s head, and down his back. Each square was treated at different times, on different days.  They brought out the elephant trunk and laid a pad on his back. Then, he was surrounded with bags of rice to absorb the radiation.

The whole room was lined in lead. “Everybody would have to leave the room except for me,” said Graber. He went back to the hospital every day for treatment, 75 miles from home. Eventually, he went three times a week, then once a week, once a month and then once a year.

“Finally, after 10 years, they said I didn’t have to come back anymore unless there were problems,” he said.

“I just turned the big six-oh,” said Graber. His family planned a surprise party and 35 of his family members met in Indianapolis to celebrate with him. “I had a good suspicion there was something going on,” he said, smiling.

Graber grew up in southern Indiana with three brothers and two sisters. He attended four years of regular public school before losing his sight. After that, he attended a school in Evansville, Ind., that helped mainstream students back into the regular school system. There, Graber learned how to read braille and use a typewriter, as well as a white cane.

He returned to the local public high school for four years and then attended Goshen College in 1971. He majored in social work but jobs in the field during the mid 70’s were hard to come by.

Between his junior and senior year, Graber lived in Kokomo for six months and learned how to tune pianos from a visually impaired man. “I felt I had a pretty good ear for pitch,” said Graber, who has made a living tuning pianos for 40 years now.

He uses a tuning fork to set the pitch and then everything else is done in comparison to the intervals and beats. “I start by setting middle C, which gives me my tuning form or perfect pitch,” Graber said. Then, I set all the intervals between middle C; F above and F below so that the thirds, fourths and fifths all coincide and beat the beat that they’re supposed to.”

It takes Graber an hour and 15 minutes to tune a piano.

“I’ve played a lot of music in my life,” he said. The harmonica, guitar, autoharp, bass guitar and crystal glasses to name a few. He has traveled most of the United States performing.  On one trip out west, Graber gave 49 concerts in 57 days. “It got to be a little like work,” he said.

Graber lives in a bi-level home on Main Street in Goshen. He showed a visitor the way to the guest room, feeling along the walls; he kneeled on the ground in front of a few boxes of his own CD’s. “What does this one say?” he asked to make sure he had the right one. He has released two of his own CD’s: “Autoharp Hymn Time” and “Walk This Road Together.”

Graber has also traveled overseas on many occasions. He went to El Salvador for Goshen’s Study-Service Term in 1973. While he was there he had the opportunity to stay with a host family. Graber’s host brother, as it happens, was also sightless.

Graber continues to practice his Spanish by speaking with some of the waitresses at Joanna’s Restaurant on Route 15, across the street from Waterford Elementary School. “I walk down there,” he said. “There’s three of us guys that meet there in the afternoon about 3 o’clock — that is, if we’re not working.”

Graber has also been to Europe with People to People, a student travel provider. While he was there he played guitar with a choir and was involved in numerous programs with different music groups.

“I don’t claim to be supernatural,” he said. “The things I have done in my life are because people have encouraged me to do what I can and then allowed me the chance to try it.”

Growing up, Graber rode bicycle. “I used to start up by the house and I’d circle out by the front yard,” he said. “The driveway was on the north side so I’d circle out and come down to the bottom of the driveway; then when I’d hit the rocks, I’d turn back.”

“In fact, I used to ride my brother’s motorcycle that way too,” he added with a smile.

One of the proudest moments in his life came in his late teens when he learned to water-ski behind the family boat. “It was pretty hard for Mom to let me do it but I crawled out of the boat one day and said I was going to water ski,” he said. Graber was up on the first try.

He learned to feel the wake behind the boat because he could sense the roughness of the water caused by the propeller. “There was a smooth area before it went up and out of the wake,” he said. “Once I learned I could stay in the wake then I could turn and go out over the wake and keep the slack in the rope and everything.”

The family worked out a system using an athletic whistle to signal to Graber whether to stay in the wake or not. “Three toots meant they were at the end of the lake,” he said.

“Some people ask me what the hardest part of being blind is,” he said. “It’s the mobility- the transportation — needing to rely on others. I sometimes wish I could see to get there and then be blind once I’ve arrived where I want to be.”