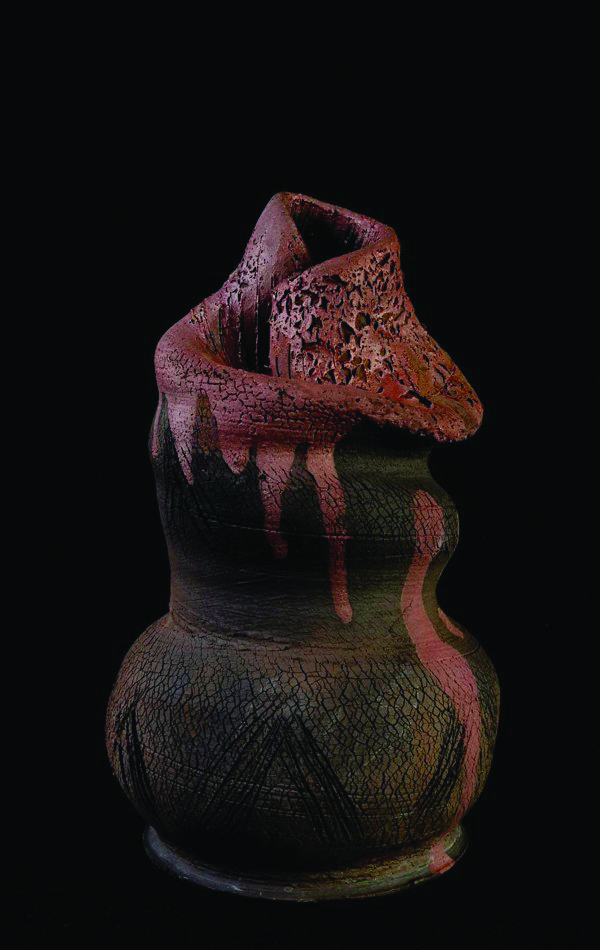 Sitting on a stool and eyeing a spinning mug from six inches away, Abi Abebe Tsigie trims the unwanted clay from the base of his hand-molded mug, and smooths the edges round before initialing the bottom and moving on to the next mug.

On a shelf where he stores his artwork, Tsigie shows his collection of pots, mugs, vases and ceramic sculptures.  Some have been glazed and fired, and some are the collapsed remnants of failed throws, but all bear the fingerprints of an artist who hopes to shape the world he lives in like the clay he sculpts.

Tsigie came to the United States from his home country of Ethiopia in 2008 to study computer science, but he decided in his first semester to focus on ceramics.  Working with ceramics in particular has become a very spiritual practice for him.

“I’d rather think while I make,” he said.  “The process of wrestling with the clay, pushing the clay is what, for me, makes art spiritual,” said Tsigie, who believes the functionality of his end product is not as important as the process of creating it.  In his eyes, he actively combines the four elements of earth, water, fire and air into a meditative expression of the human condition.

“There is something good about throwing forms that you are used to” he said, “letting just that muscle memory work rather than your brain, and letting your brain actually just wander, and letting the subconscious come.”

Abi Abebe Tsigie graduated from Goshen College in 2012 with a degree in art, and a concentration in ceramics and photography.  He currently lives in Goshen, and continues to cultivate his craft with the clay he buys from the college.  He has made hundreds of pieces.  Some are functional, able to be used for food or drink, but they are the exception.

“Ceramics is more abstract and more sculptural,” he said.  “I like to explore human condition in ceramics.  Love, and sorrow, and health, and sickness–how the human body and the human spirit is resilient, how the human body is so similar like clay.”

Creating art that will engage with the human experience, Tsigie comes from a place where art is very common, but misunderstood, and he hopes to change the perspectives Ethiopian people have of art.

“Art is something rich people buy just to hang on their walls,” Tsigie said of the Ethiopian perspective, in which artists are looked down upon.  “It’s taboo–it’s very low-class,” he said.  He looked online to see how many ceramics artists are in Ethiopia, and found only two who had a degree in ceramics.

Tsigie says he hopes to be the third.

To Tsigie, ceramics might even be the catalyst for social change.  “Everybody [in Ethiopia] is wanting to be a doctor, or engineer, or lawyer or something like that,” he said.  “A country just doesn’t need 30,000 doctors–a country needs potters, poets, architects, everything.”

“At this point, I feel like my battle is trying to change the understanding of pottery in that culture, because it’s really twisted,” he said.  “I guess part of my social change is also being a ‘sweeper.’”

Tsigie compares his role of pioneering ceramic art in Ethiopia to that of a minesweeper, probing for buried explosives until one explodes.  And after that, someone else picks up the stick and keeps probing.  “My social change, I might not see it in my lifetime,” he said.

Though Tsigie may never see the kind of social outcome he desires with his ceramics, some of his older artwork has proven that artistic expression is rarely interpreted in same way from person to person.

In his sophomore year at Goshen College, Tsigie made a series of 10 ceramic vessels of various sizes for an assignment. “I was envisioning a small, cut-down ash tree,” he said.

One of the remaining pieces from that series stands about three feet tall.  It’s hollow with an opening at the top, glazed green, and had ridges along the side to emulate the bark of a tree.  There was even a fray of roots protruding from the base of the tree, even though most had fallen off.

Tsigie said he had made the roots from scraps of other artists’ ruined ceramic pieces for each of the sculptures.  “I dry these, and then make them into a square, and I slice them,” he said.  Using the broken clay fragments, he attached them to the bottom of his ash tree and fashioned them into roots.

Last month, a photograph featuring Tsigie was removed from the cycle of images on the Goshen College homepage because of a misinterpretation by viewers of the ash tree as phallic and because of the way he was holding his hands as he posed for his shot. He was holding them in the symbol for the Holy Trinity among Rastafarians, but that same sign is the word “vagina” in ASL.

“We were excited to feature Abi and his artwork on the college’s homepage,” said Jodi Beyeler, who is the assistant director of public relations, as well as the news director, at Goshen College.  “But when it became evident that the photo was being misinterpreted from Abi’s or our intentions by multiple persons, we decided to find a photo that wasn’t as open to misunderstanding. This wasn’t about censorship of his art or his religion, but rather a goal of clear communication.”

Tsigie said, “I was pretty disappointed, but it angered more people than it did to me because it raised transparency issues, sexuality issues.  It raised a lot of questions.  I don’t want a new photo taken, because this photo has nothing wrong with it.  It is my religion that is shown, and it is my art, and that art is open for interpretation.”

Tsigie’s ceramics will be on sale in the Union building on Dec. 11, and photographs of his artwork can be seen in the Goshen Art Center at 113 1/2 E. Lincoln Ave.