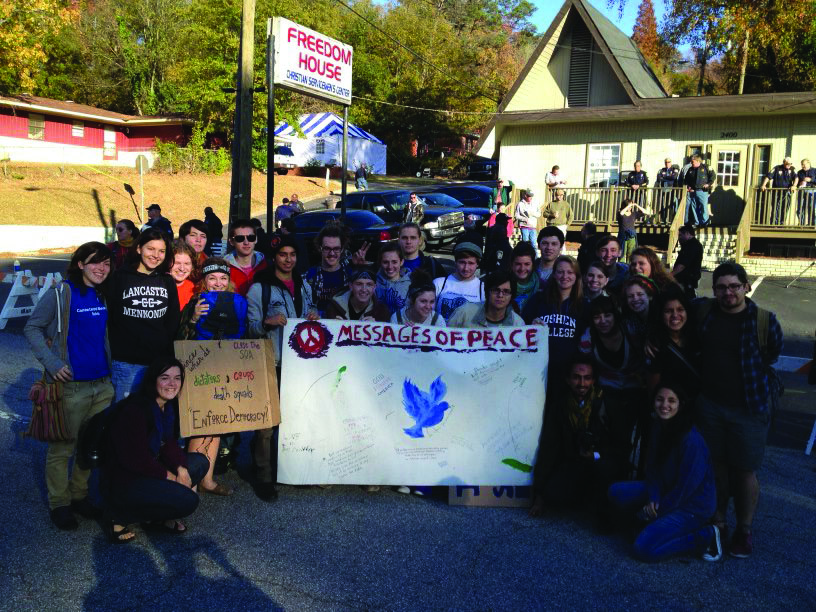 On the weekend of November 16, about 40 students from Goshen College attended a large gathering outside the gates of the Western Hemisphere Institute for Security Cooperation (WHINSEC).

The event was organized by the group SOA Watch, who seeks to see the army school closed. SOA part stands for ‘School of the Americas,’ the name that the military base had when the group formed. The School of the Americas’ name was officially changed to WHINSEC in 2001. The SOA Watch group says that the annual gathering is “the largest annual anti-militarization gathering in North America.”

The SOA Watch explains that the SOA/WHINSEC is a U.S. taxpayer-funded school that “trains soldiers and military personnel from Latin American countries in subjects like counter-insurgency, military intelligence and counter-narcotics operations.”

The SOA has a troubled history and many of its graduates have been involved in human rights violations or international crimes. Famed graduates of the SOA include Manuel Noriega, international criminal and ex-military governor of Panama, Juan Velasco Alvarado, Peruvian dictator, and other officials involved in many massacres in Latin America. In the 90s, the Pentagon revealed that from 1982-1991 the school used manuals that instructed students on executions and torture.

This is not the first year that Goshen College students have attended the event; in previous years the PAX student club has sent students down to the protest. This year’s group was a lot bigger thanks in part to the efforts of the new Social Reform Club (SRC). The group organized the trip and worked diligently to finance it. One of the SRC group leader’s, Juan Moya, went on the trip and described the planning process as being pretty intense.”We had to meet a lot and write to a lot of churches. We got a lot of our donations from churches and also PAX and the PJCS department,” said Moya.

The group left Goshen on Friday and arrived at a homeless shelter in Atlanta. On Saturday the group made the two and a half hour trip to Fort Benning, Georgia. “On Saturday there were a lot of music and speakers,” said Moya. In the evening there were workshops of activists from all over the U.S. and Latin America touching on different issues, and on Sunday there was a vigil that commemorated the victims of violations from SOA/WHINSEC victims.

“The purpose of the entire thing was to remember them as a human beings whose names are worth mentioning. It’s not just a number but a whole entity, part of a community and country,” Moya said.