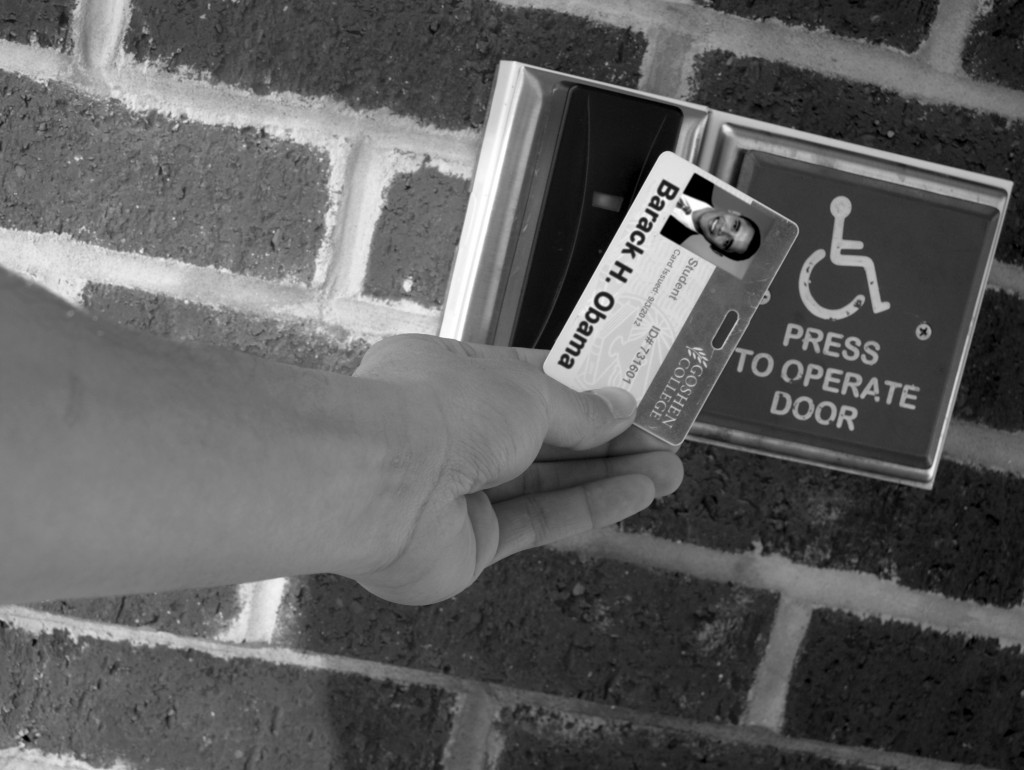 It has been about one year since Goshen College restructured campus security. The major changes brought on by the restructuring were the implementation of the entry card system and creating an “in-house” security team instead of contracting with a security firm.

The entry card system in use around campus was launched last year but the system was not without downfalls. “It’s great to have in place, but anytime you implement things of that magnitude there are going to be issues that you address throughout the year,” said Bill Born, vice president for student life. One of the most notable changes made to the card system includes allowing student life to manage visitation rights on the floors of KMY.

“We can manage not only visitation, but can also manage access by gender, and that allows peers to go to and from [different floors] without having to call or knock,” said Born. This change was brought about because a student expressed concern that arose last spring.

Al Mackowiak leads the campus safety and security office, which is a new office that was created last fall as part of the security overhaul on campus. Mackowiak is a 35-year veteran of the Goshen Police Department, and has spent 14 years working on child molestation cases, four years as the captain of the Detectives Bureau and his last five years working with Homeland security on identity theft and illegal immigration issues.

Mackowiak has had a year to adjust to his new position. “I think at first people were sort of hesitant with what to expect of me and the in-house security system,” Mackowiak said, “but as the community gets to know me better, people seem to be happier.”

Along with Mackowiak, the security office has three new security members on staff, one working full-time and two working part-time, in addition to the retention of Walt Miller and Bruce Miller. The new full-time employee is Jane Huff, a retired officer who spent 26 years as a GPD road officer. The two part-time officers are David Baker, who is retired from the Navy and now serves as a reserve officer in the Bristol Police Department, and Ezekiel Kingsbury, an Indiana University Bloomington graduate who works with the access card system.

The new security office is implementing a security website to fill student’s security needs. The website currently allows students to report a stolen bicycle, but in the future Mackowiak hopes it will offer students more.

“Eventually we want to develop the quiet sentinel, a way for people to file reports confidentially,” said Mackowiak.

Mackowiak also explains that students can e-mail “security@goshen.edu” with any questions or concerns. “I want to make sure students know that if you don’t know who to call, then call security. If you are in trouble or need help and don’t know who else to turn to, call us. We may not be able to fix all your problems but we can point you in the right direction.”

The campus crime report, required from colleges by the Cleary Act, can be found at: http://www.goshen.edu/studentlife/safety/crime.