After making history, Leafs repeat it 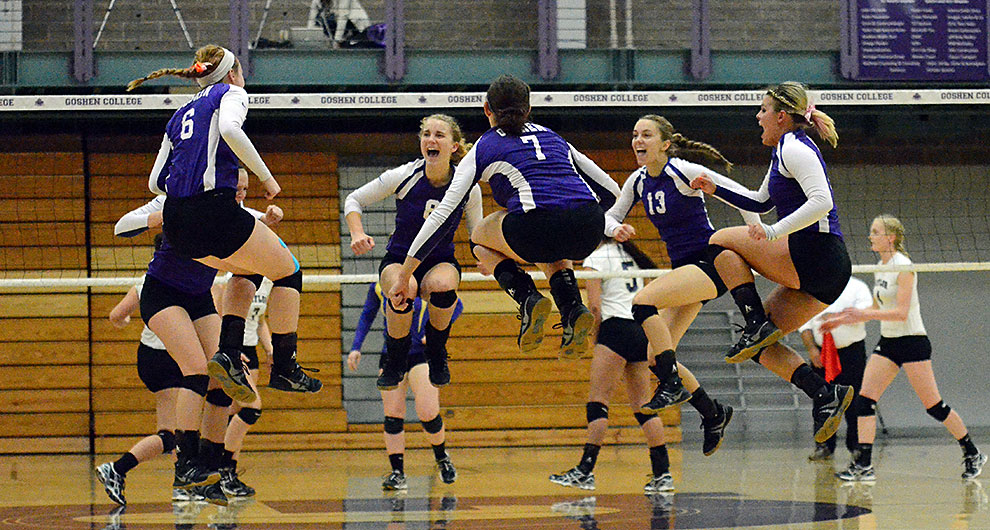 History, the axiom says, repeats itself. For this, the Maple Leaf volleyball team could not be happier.

Four weeks ago, on Wednesday, Oct. 10, Goshen made history: they defeated Taylor for the first time since 1991 and snapped a 38-match losing streak to the Trojans. Tuesday night, the Leafs traveled to Odle Arena in Upland, Ind., to take on Taylor once more. Since the match marked the opening of the single-elimination Crossroads League tournament, one team’s season was about to end.

The fifth and deciding set went to the Maple Leafs, who won five of the first six points en route to a 15-11 win. This season marks the first time Goshen has defeated Taylor twice since 1987.

Melanie Meyer, a sophomore, had 19 kills and a .341 hitting percentage to lead all players. Jaime Stack, another sophomore, turned in a double-double with 10 kills and 15 digs. Libero Missy Mackowiack, a sophomore, had 24 digs to lead the Leafs; Stacy Wyse, a junior, led Goshen with 36 assists and 20 digs of her own.

With the win, its first in the Crossroads League tournament since 2009, Goshen advances to play Bethel tonight in the semifinals. The Maple Leafs dispatched Bethel 3-1 in their last tournament meeting, also in 2009; the Pilots swept both Goshen/Bethel meetings this year.

First serve is scheduled for 7 p.m. inside Goodman Gymnasium in Mishawaka, a building where Goshen has not won since 1992. The Pilots played in their basketball arena, the Weikamp Center, from 1999 to 2010. Pregame coverage on 91.1 the Globe will commence at 6:45.

As the lowest remaining seed in the Crossroads League tournament, Goshen would also travel to the final if it reaches that game. The championship match will be Saturday; GC would play at either Indiana Wesleyan or Grace, and the first serve will likely be at 1 p.m.