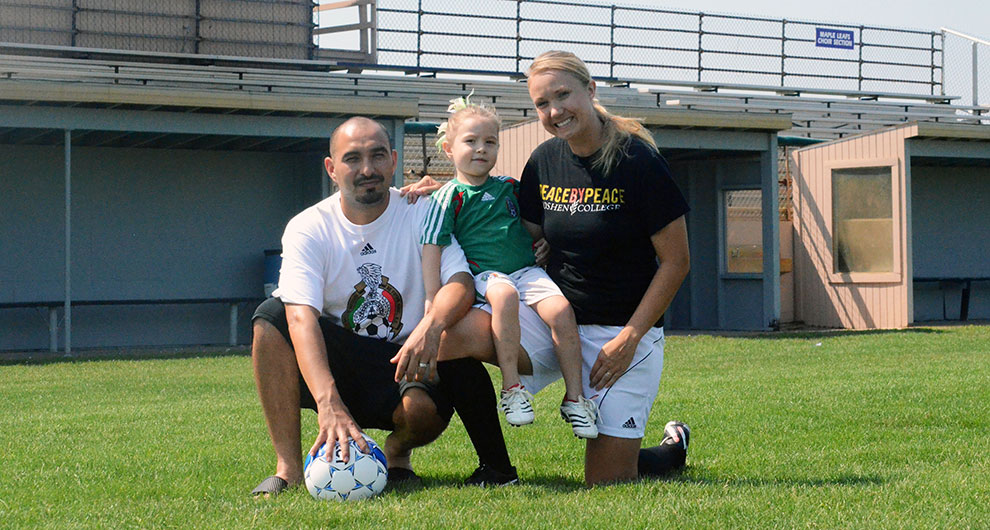 For the first time in years, Carlos and Sara Soto feel entirely at home.

In their final season as collegiate soccer players, the Soto family, which includes 4-year-old Natalia, is exactly where they are supposed to be.

The road here has had its challenges and turns, but as long as they have each other, the family said, every bit has been worthwhile.

While going to school and playing junior college soccer near her hometown of Susanville, Calif., Sara Soto was introduced to Carlos, who had immigrated to the United States from Mexico as a 14-year-old and built a successful career as an electrician.

The couple fell in love, married and began a family together. Sara left school to be a stay-at-home mom to little Natalia. Then, the economy tanked and the young family found themselves without a breadwinner.
“It got really hard financially when Carlos got laid off,” Sara explained. “We got a good offer to go back to school through an old coach. We thought: we need to do something; we don’t have anything available to us right now; that’s (going back to school) a great idea. We were just at home trying to work everything out. It was a really difficult time.”

After deciding to return to school, the couple met a soccer coach, Fabio dos Santos. He recruited both to Waldorf College in Forest City, Iowa, where he coached both the women’s and men’s programs.

Carlos recalls a conversation with dos Santos in which the coach said, “I understand you come as part of a package.”  “We do,” Carlos said. Dos Santos responded, “What do you think about Iowa?”  “Well, tell me,” Carlos replied.  Soon the family was packing for Iowa and the 2010 preseason.

But first the Sotos went to North Carolina where Carlos’ mom was operating a restaurant.  It was on the road from North Carolina to Iowa (in Indiana no less) when their lives took another fateful turn.

Sara had the car in cruise control on the highway and was moving into the left lane to pass a slower vehicle.  She saw a fast-approaching car from behind too late.

The car carrying Sara, Carlos and Natalia flipped several times with the force of the accident so violent that it literally knocked the shoes right off the family. They escaped with relatively minor injuries, including cuts, road rash and bruising from seat belts.

As Sara recalls, though, the road ahead still had many unknowns.

“It was just a horrible experience,” she said. “We didn’t know anyone there. We didn’t have enough money to stay anywhere. It’s hard to even talk about still because I was the one who put us in that situation, and it’s just hard.”

Without a car and without a way to get the rest of the way to Iowa, the Sotos were stuck, unsure if they would be able to continue to go to school, much less play soccer.  Then, a friendly Hoosier stepped in.  A local hotel owner allowed them to stay at his establishment for free while they regrouped, and then he drove them 45 minutes to the nearest place to rent a car.

They did eventually make it to Iowa and played for dos Santos last season, but it never quite felt like home.  Coming from California, the couple particularly struggled with the lack of diversity and recalled instances of discrimination.  When dos Santos left to coach at Goshen College and the opportunity came to follow him, there was little hesitation to make yet another turn in their road.

Back in the state of Indiana a year later, the Sotos found comfort once again.

“We just say it was meant for us to end up back in Indiana,” Carlos said.  Sara added, “Everyone is so friendly and helpful here.  We feel so comfortable; it is something that is really hard to explain in a few words.  We just really like it here.”

On the pitch, Sara was quickly in another comfort zone last year using her experience to help lead a young team.  As a team captain for the Maple Leafs in 2011 and 2012, she has started 23 times and is an anchor on Goshen’s back line.

“I have a respect for my teammates and they have it for me,” she said.  “They understand that I’m older and they will listen to me.  I think it means a lot that they can count on my experience.  I tried really hard not to be overbearing and didn’t want them to think that I had some privileges or anything having come in with the new coach.”

The on-the-field transition has been different for Carlos.  Injuries, a new system and a new coach have contributed to just five appearances, but he too has used his experience to have a positive influence on his teammates.

“Sometimes when I first came here, I felt kind of out of place because the younger players thought I was like 30-years old with a kid, and they were like ‘What are you doing here?’” he remembered.  “I said, ‘the same thing as you.’ They have gotten to know me and things changed.  I try to be a big brother figure to them.”

Even with soccer and studies, the couple’s biggest priority remains their daughter.  When the weather is nice, the Sotos can be seen riding their bikes together to campus with Carlos and Sara heading to class, dropping off Natalia at CCYC (the Campus Center for Young Children).

“It’s kind of a cool experience that we are all going to school together and right here at the same place,” Sara says.

Though the on-campus daycare has its conveniences while in classes or working, Carlos and Sara value every bit of time they can spend with Natalia.

“If I am doing homework and she wants to play, I will just stop and play with her for a bit,” Carlos said.  “We try to do a bunch of stuff outside the house so she is not bored.”

Sara added, “We try to make sure that one of the two of us is who is at home with her, especially in the offseason.  It means a lot to us that it is us watching her because our priority is that we need to have that time together.  We don’t have a schedule, just take it one day at a time.”

With the support of each other, the academic road is also becoming more clear for Carlos and Sara.  Carlos’ experience with the car accident and soccer injuries have led him to change his major to nursing.  They both grin at the irony of ending up at Goshen College where nursing is such a strong program, how others have helped care for them along the way and what a good fit it has all become for Carlos.

Sara, meanwhile, is just over a semester away from a long-awaited graduation with a graphic design major.

“I’ve been in school for so long, so it’s exciting,” she says.  “I’ve seen everyone I started with graduate.  With what we have been through, I’m proud of myself for even making it this far.”

It took a number of states, challenges and turns, but the long road has finally brought Carlos, Sara and Natalia Soto home.