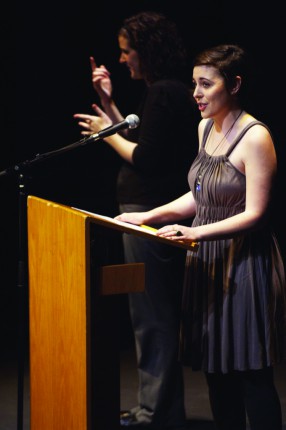 For the first time in 6 years, a Goshen College student has won the intercollegiate C. Henry Smith Peace Oratorical Contest. Lauren Treiber, a junior PJCS major, won with a speech titled “The Real Occupy Movement: Understanding Capitalism in a Christian Context.” Treiber delivered the speech in the Umble Center last year for the pre-contest between Goshen students.

The C. Henry Smith Peace Oratorical Contest is open to any student who attends a Mennonite or Brethren in Christ college or university. Currently, all of the competing schools reside in either the United States or Canada. Each school selects one speaker for the contest, and a video recording of the speech is then submitted to judges selected by Mennonite Central Committee. According to the guidelines of the contest, entries must be about the “application of the Christian peace position to contemporary concerns.” The winning speech is also made available to the Mennonite World Review for publication.

Lauren Treiber said she wasn’t expecting the news at all. “I wasn’t exactly googling Mennonite World Review waiting to see if it would show up or not show up,” she said. However, on Oct. 2, she received an email announcing that she had won the bi-national competition. “I read the email a couple times over because I was stunned.”

Treiber said that the speech itself was trying to use the Occupy Wall Street movement as a means to examine what Christians should “see and do in a capitalist system.” She was concerned by her perception of a movement painted in very black and white terms. “I wanted to explain why people in the movement had shown up and started saying this, and also show how it existing gives Christian people a reason to look at a broader social issue,” she said. Treiber also cited concern that the movement relied too much on “finger pointing” rather than the “holistic transformation of people.”

Pat Lehman, professor of communication who has been involved in organizing the contest for students on campus for 13 years, said that Treiber’s speech may have stood out to the judges because of how salient it was. “It was about the Occupy movement, and so people were very interested in knowing what her perspective was,” Lehman said.

Treiber agreed that she was in an interesting position to have an opinion on the Occupy Wall Street movement. “I thought it was somewhat unique that a person who was at the time 19 and a college student—someone people might think would be in support of Occupy Wall Street—really questioned parts of the movement, but not for the typical conservative kinds of reasons,” she said.

This is not the first time a Goshen student has won the contest. Lehman pointed out that Goshen college alumnus Rebecca Fast had won in 2006, and that current student Jair Hernandez had ranked second last year. “There’s a positive ethos on campus surrounding the contest, and overall I keep getting affirmation that the contest is stronger and stronger every year,” Lehman said.

Treiber said she was very happy by the results of the contest. “I’m not a person of low expectations, but I didn’t assume anything would come from it. It was really liberating to be able to share that here and be supported by people I really respect and care about. It was the cream of the crop in terms of Goshen experiences,” she said.

When Treiber first responded to Lehman about the email declaring her ranking in the contest, she indicated having some difficulty in knowing just what to say. “I am speechless,” Treiber wrote. “Speechless!”