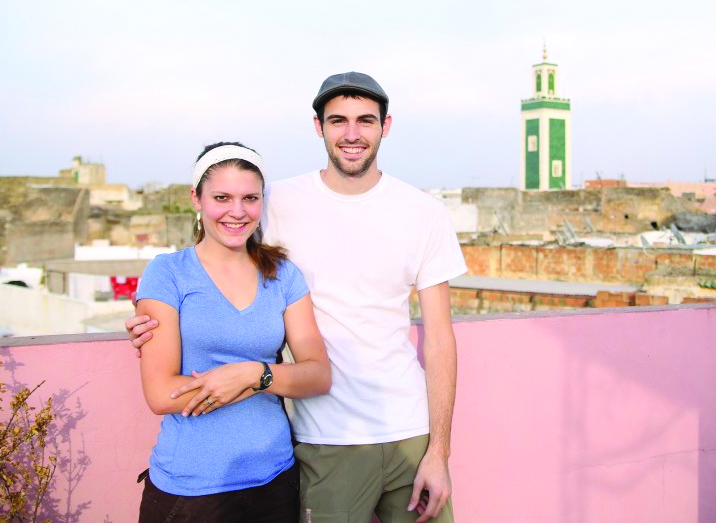 From the wobbly back of a camel, to the top of a rust-colored mountain of sand in the Sahara Desert, to vast valleys and forests in the Atlas Mountains sprawling with apes, to leather tanneries and old medinas, to the ancient Roman ruins of Volubilis, to a waterfall and a river city of huts, to the everyday petit taxi ride to and from school … I feel privileged to have experienced so much of Morocco. However, my most recent experience strikes home the strongest (no pun intended).

A single blade slivered through the turf, straining against the old donkey as it was forced it to do its job. I hoped to catch more of the man in the jilaba who was leading the donkey, but our bus whizzed by and he was gone. The plowed earth continued on, however, and I stared in amazement that everything I was looking at had all been done by one man, a donkey, and a blade. The countryside of Bensmeem, a small village about an hour from our study location in Meknes, was unique and different from my home in South Dakota in so many ways—yet I soon found a familiar layer below the surface.

There was a cornfield near the village we visited that was made up of four sections, about 10 rows apiece. The field was probably about 70 yards long and nestled against thick sage all around. Here and there were strange, tall, skinny trees. After getting off the bus, our class walked down to the back of the field by the sage. As I took in the scent I was whisked back to home, to farm life, and—to be more specific—cow manure. This was the beginning of my home-away-from-home experience.

Later that night, as Vanessa and I followed our host dad, Idriss, up the slender street of the village to his home, the sun skimmed the edge of the hill much the way it does on my farm—except here it bathed clay, cement-like buildings in warmth and reflected off the basketball warm-up clothes that Idriss wore. Although he looked young with his welcoming smile and soft-spoken nature, I later found out this man was actually 40 years old. He could have passed for 30. He greeted people and kids high-fived him as we walked past. His family–a wife, 2-year-old boy, and 1-year-old baby–had much the same friendly demeanor.

Maybe it was the familiar scents and the landscape, maybe it was the family’s good nature, or the humble abode that many Americans would consider an unused basement. Whatever it was, though, I can be sure that I have never felt so at home, so far away from home, as I did that night. And when I walked out of the outhouse at 4 a.m. to gaze up at the bright moon and glimmering stars, I knew I was experiencing something I would never forget.