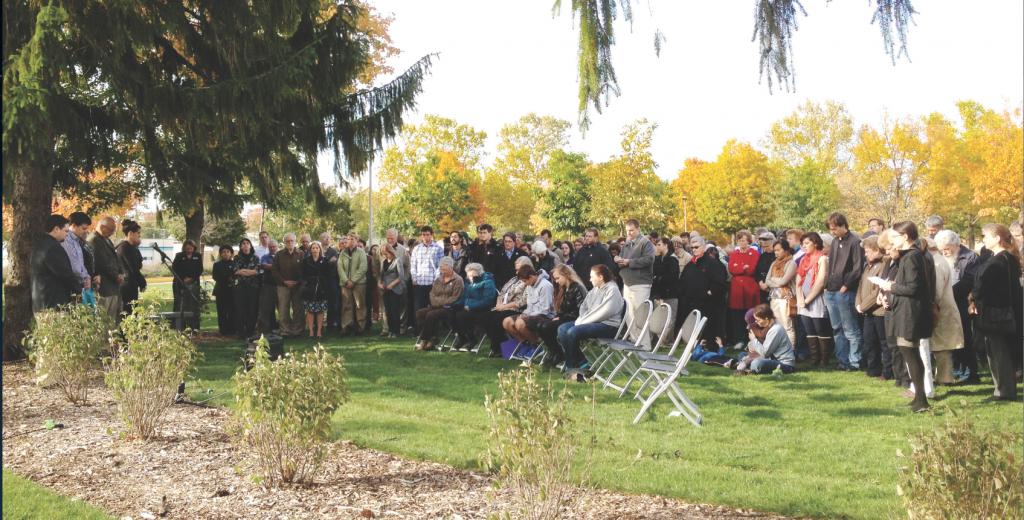 About 150 people from all walks of life congregated at Goshen College to remember Dr. James Miller on Tuesday. The gathering took place at the Prayer Labyrinth on campus where the classes of 1962 and 2012 have donated plantings and a bench in honor of Dr. Miller. The event commemorated the one-year mark since Miller was killed in his home by an unknown intruder.

The ceremony was a celebration of Miller’s life and allowed students and faculty to gather to remember him. The gathering was led by Bob Yoder, campus pastor, who began the event and introduced the speakers. Vic Stoltzfus, president emeritus, read a prayer prepared by President Jim Brenneman, who was off campus on Tuesday. In the prayer President Brenneman expressed sorrow over the loss of Miller by those that knew him, specifically his family, students and colleagues.

The prayer was followed by statements from two of Miller’s students, Indigo Miller, a senior nursing major, and Peter Martin, a senior molecular biology and biochemistry major. Both students had Miller as a professor and shared fond memories of him. They remembered the times they spent with Miller both in and outside the classroom as they developed a relationship with a man who heavily influenced their medical education at Goshen College.

Indigo remembered an important lesson that she had learned from Miller.

“He taught us what we needed to be an educated nurse, but also how to see the beauty in life’s complexity,” she said. Indigo ended by thanking Miller for everything he had done for her and for the college community.

Peter also remembered his interactions with Miller and the time that he had spent with him outside the classroom. It was these conversations where Martin got to know Miller as more than just a professor. “He was passionate about his career, but more importantly, he was totally invested in his family and his students,” Peter said.

The student statements were followed by a moment of silence and the event was concluded with a hymn singing led by Beverly Lapp, professor of music.

After the service, a small group of students who had all known Miller gathered to exchanged their thoughts on the memorial service and share more memories of Miller.

Ben Diedring, a senior, reflected on the loss of Miller as a professor and how it impacted him. “It’s really hard; you lose a big piece of guidance especially being pre-med, just because of all the work that he did. He helped out so much, just having someone there you could talk to.”

Michael Zehr, a senior, commented on the attendance at the gathering. “It’s amazing to see this crowd and all the people that showed up to remember him. He’s brought a lot of people together,” Zehr said.

One thing that the students could all agree on was their pleasure at seeing Miller finally being remembered for his life and not for his death. One such example came from Martin, “I’m so glad that we are finally focusing on him instead of the crime. We’re finally talking about everything he meant to the community and all the stuff that he did instead of the horrible way that he died because it’s not right to focus on that one moment that was so horrible when there were so many good things that he was doing when he lived his life. I think all the stuff he’s done for the community is going to last a whole lot longer than that tragedy will.”