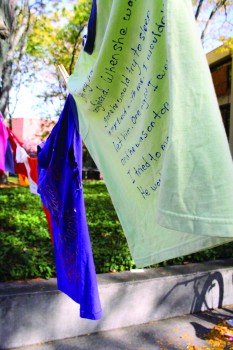 This week, members of the Goshen College community have come together to participate in Sexual Violence Awareness Week. The week of reflection is meant to foster awareness and conversation on campus related to issues of sexual violence.

Sexual Violence Awareness Week consists of many events coordinated by different groups on campus. The Clothesline Project—represented throughout the week by hanging shirts with words from those touched by sexual violence—is organized by students in the Social Work Action Association. A Monday morning convocation by Dr. April Lidinsky addressed how images and advertising can reflect cultural values that promote sexual violence. On Tuesday night, men on campus had the opportunity to discuss the week’s topics over pizza. Goshen Student Women’s Association organized a Take Back the Night event Wednesday at 8 p.m., and PAX Club is planning a candlelight vigil in honor of those impacted by sexual violence on Thursday at 9:45 p.m. in Schrock Plaza.

“It’s important that people have options for how they want to experience this week,” Gotwals said. “For example, if people want something more individualized, they can go to the Clothesline Project. It’s important that whatever way people need to process this, there is an outlet for those different types of needs.”

Beth Martin Birky, a professor of English at Goshen who also teaches in the women’s studies department, has helped organize events related to sexual violence awareness for more than seven years.

Birky said the greatest value in Sexual Violence Awareness Week is to “get people talking and to raise awareness of our attitudes toward men and women and how sexualized our society has become in the way we relate to each other.” Birky said that our thinking on sexual violence tends to be too external. “When it comes to sexism and sexual violence,” Birky added, “we tend to only think of that being somebody else.” She said part of the challenge of changing these perceptions is allowing people space to ask questions rather than become defensive or dismissive.

Gotwals and Birky both said they hoped that Sexual Violence Awareness Week would serve to help humanize these issues for more of the campus community.

“Until it’s personalized, it doesn’t quite matter as much,” Gotwals said. “You can’t hear these stories and not have them affect you, so my hope for this week is that it will help humanize these experiences with other students on campus.”