For student beekeepers, the product is sweet 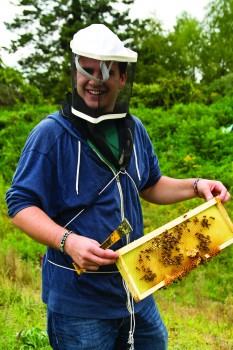 Students that walk by the campus prairie patches may encounter native plants, flowers and insects. But for several students, working with insects—especially bees—is a deliberate choice.

Andy Ammons, assistant professor of Biology and fondly referred to as the “bee guy” around campus, heads up a variety of bee projects.

“I believe in an integrated experience,” said Ammons. “Time with both the field work and lab is important.”

Josh Yoder, a junior, worked at Merry Lea over the summer doing research on bees. “I do field collection. One part looks at numbers and diversity mainly in bees. (Another looks) at the diversity and abundance of flowering plants and the relationship between the two,” Yoder said. ““Basically my question is, ‘What is the most ideal habitat for native pollinators?'”

Yoder worked with Lydia Yoder, a senior, who is at Merry Lea currently with the Sustainability Semester. Lydia only recently started on the bee project but both her and Josh are continue to work on it.

Ammons explained native pollinators. “(They) are specifically anything but the honey bees. Honey bees were introduced from Europe. Native species are those that were historically already here, since before the first settlers.”

Josh Yoder added, “Native bees can fulfill a large percentage of the pollination requirements that commercial honey bees are used for if we create good habitat for them. And then we look at how we can incorporate that into our agricultural landscape to get the ecosystem benefits of a natural ecosystem that helps humans.”

Ammons continued, “introduced western honey bees don’t pollinate everything, there are many species of native plants that are only pollinated by the native bees. Some commercial food crops are only pollinated by these native bees. One such example are the bumblebees and tomatoes. The vibration of the bumble bees wings causes pollen to leap on and help the self-fertilization of the tomato plant.”

The other part of these projects is research-based. “I did research with Andy this summer with the honey bees, with the five hives on campus,” said Mara Swartzentruber, a senior. “We were doing research on two different subspecies of bees … I thought the project was really interesting and Andy knows a lot about it. It was really interesting just to talk to him and hear all he knows. If someone is interested in these projects then you get to actually go out and work with the hives instead of just working the whole time in the lab where the bees are dead.”

“From a scientific point of view, I really enjoy the genetics, just because I am into genetics. There were a couple of things I found that were a little different in the two subspecies. This fall I am continuing the research and can hopefully see the differences more. I need more trials and research to be able to confirm anything.” says Swartzentruber.

Michael Zehr and Peter Martin, both seniors, worked together on a project, extracting RNA from the bee’s brains, as an extension of a Maple Scholars project. “I liked the research aspect but my favorite part was going to do maintenance on the hives. Andy has a lot of knowledge and I can learn from. The more I learn about honey bees and see the big picture, I realize how necessary honey bees are. I’m an avid lover of nature, and all things alive. Honey is one thing but even food in general, bees are an essential part to flowers and food growing. We rely on them more than we realize.”

Part of the maintenance is extracting the honey. Karina Kreider, a beekeeper for the last four years back in her home state of Pennsylvania, was able to be part of that aspect of the bee project. “Its really fascinating to think about all the work the bees put in. Just thinking about how delicate of a procedure it is. And just knowing that as a beekeeper I’m doing something for the environment, to help the world, even if it is a small part, I’m part of a bigger movement.”